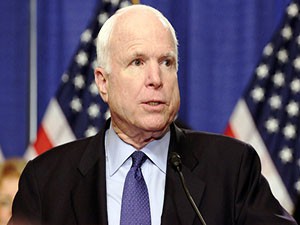 As you know better than anyone, the Department of Defense and the U.S. military are at greater risk today perhaps than at any time since September 11th.  The principal threat is not al Qaeda, Da’esh or a resurgent China or Russia although a good part of the world remains dangerously unstable.  Nor is sequestration, despite its irrationality and mindlessness, the mortal danger although it will harm the forces.

Instead, the Pentagon faces three internal threats provoked by flaws in strategy, personnel policies and explosive cost growth.  If these flaws are not corrected, the predictable outcome will be a “hollow force,” reminiscent of what happened after the Vietnam War when America’s military capability, preparedness and morale imploded.

As Chairman of the Armed Services Committee and the U.S. Congress’s top defense expert, you are one of the very few who understand and can address and prevent what will become a 21st century equivalent of the hollow force of the 1970’s and early 1980’s if we do not act now.

Every administration going back to George Washington probably has been criticized for having no strategy or the wrong strategy.  Today is no different. The fundamental flaw is a vapid overarching national security strategy based more on grand aspirations rather than on well-defined objectives, priorities and a specific plan for achieving them.

Regarding people, as the nation recovers from nearly a decade and a half of war with constant combat deployments in which little expense was spared, the military will have to adapt to more mundane peacetime roles and constraints. Preparing for conflict is far different from preparing to go to an actual war.

Readiness will suffer.  The forces will not be as well equipped.  And the military will have to take up routine tasks once filled by civilian contractors from standing gate guard duty to food preparation to mowing grass and other household functions.

For the ground forces that have been highly and specifically trained for capture or kill missions against insurgents rather than fighting other armies, a major transition will be required.  But sufficient resources for retraining are unlikely to be available.  As a result, a significant portion of the force who were highly motivated by serving their country in fighting in Iraq and Afghanistan will chafe at the more boring peacetime duties.

But the most diabolical threat and indeed cancer is exploding internal cost growth for pay, allowances, health care, retirees, weapons systems, operations, training, overhead and many other items.  That cost growth is about 4-7% annually above inflation.  Studies and warnings issued by the Department of Defense’s Business Board document these trends and the consequences.  If action is not taken now to arrest this cost growth by cutting overhead that must include unneeded bases and infrastructure, by decade’s end, we will be well on our way to a hollow-like force even if sequestration were abandoned and defense spending were kept at current levels.

These internal threats are not insurmountable if they are recognized now.  Regarding strategy, my view is that the nation will be more than protected if it has the capacity to be able to deploy a joint ready force of 300,000 nominally divided between both coasts including forces already on station overseas.  Using a three to one ratio to generate that number leads to a total active duty force of under one million with obvious changes to the reserve and national guard with the critical assumption that this force is well trained and well equipped.  Indeed, it is difficult to envisage where the U.S. would need to deploy larger numbers unless we stumbled into a war with China or Iran.

Regarding people, the Pentagon must recognize this crisis in transitioning the forces to a post-Iraq and post-Afghanistan world even though some number will be deployed in harm’s way.  However the greatest threat is cost growth.  That must be attacked now.

Your committee must take the lead in this.   Congress will not be persuaded to cut pay and benefits or bases and defense industries in their districts.  Yet the choice will be that or a hollow force made worse when interest rates rise which they must increasing the cost of servicing nearly a $20 trillion national debt at the expense of defense spending.

Straight talk is needed.  We have the option of having an oversized unready, military or a slightly smaller, highly capable and motived force that can be supported by likely future budgets.

While nothing is simple, the choice is stark, real and looming.  Over to you Senator McCain!