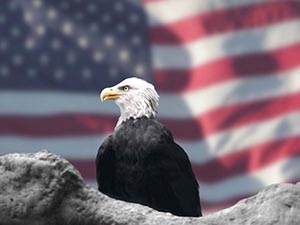 Since 1789, ambivalence over America’s international role and responsibilities has persisted.  This tension can be captured in terms of George Washington’s pragmatism not to seek permanent entanglements abroad and Woodrow Wilson’s idealism in fighting the “war to end all wars” to make “the world safe for democracy.”  Washington’s argument was amplified by John Adams’ warning against seeking foreign monsters to slay.  Unfortunately, presidents from John Kennedy and Lyndon Johnson to George W. Bush were deaf to such wisdom.

Americans have often been seduced or mesmerized by the siren-like call of aiding democracies and especially those pleading for help in establishing them.  Foreign wars that eventually would embroil America attracted some of its youth. American pilots flew in the Lafayette Escadrille in the First World War and the Eagle Squadron and Flying Tigers two decades later whether for altruistic reasons of protecting democracy and freedom or by the exhilaration of war. Interestingly, genocides and revolutions in Africa and Latin America lacked the magnetism of stopping the Hun, Hitler and Tojo’s Japan.

After World War II, the United States willingly became the imposer of democracy.  Nazi Germany, Fascist Japan and eventually South Korea would become pluralistic democracies under the rule of law in which elections and not the barrel of a gun determined who would govern.  Those successes were absorbed into the nation’s political DNA.  The Cold War was about preventing “Godless communism” from spreading.  And when the Berlin Wall came down, transforming the former captive states from Marxism to democracy was the first step in making Europe “whole and free.”

Yet, there were more failures than successes in aiding democracy. Vietnam was America’s first outright defeat and symptom of an Achilles’ heart.  I recall too well in the 1960’s providing security for then Vice President Hubert Humphrey as he toured Vietnam vigorously cajoling the Vietnamese to vote.  If the polls were correct, over 90% did.  And of that 90% perhaps only a handful knew what or why they were voting.

George W. Bush wanted to transform the geostrategic landscape of the Middle East by imposing democracy on Iraq and Afghanistan. Misled or suckered by Ahmed Chalabi, certainly the Vice President and Mr. Bush believed (or wished) the Iraqi people would greet Americans as liberators showering the conquering heroes with flowers and candy.  Instead, more plentiful were suicide bombers and improvised explosive devices (IED) that are producing a condition of permanent violence and civil war in Iraq.

While Afghans just voted, elections are not always synonymous with or indicative of democracy and the rule of law.  Yet Vice President Humphrey’s exultations for the Vietnamese to vote echoed in the cities and villages of Afghanistan.  And when elections in Egypt elevated the now declared terrorist organization the Muslim Brotherhood to power, no one in the White House was really sorry to see the Army take over the running of the country.  Even though the former Army chief abandoned his uniform for mufti and will become Egypt’s next president, does anyone seriously believe real democracy is close at hand in that country?

Ukraine has now drawn the sympathy and support of some Americans.  Protesters in Kiev’s Maidan Square pleaded for establishing a real democracy.  And who would oppose those genuine sentiments in the land of the free and the home of the brave?  Unfortunately, reality injects itself.  Ukraine lacks the basic institutions and structures essential for creating a real rather than a sham democracy.  The election of one of Ukraine’s richest oligarchs as president next month a democracy does not make.

Can we protect our national Achilles heart?  Unless we learn from history, the answer is a resounding no.  World War II was unique.  Germany and Japan were helpless and at the mercy of the allies.  Both had institutions needed for a democracy to flourish and earlier experience with a pluralistic political system before Hitler and the Japanese military took control.  The U.S. also extended great largesse to rebuild and reshape those societies.

Similarly, when the Berlin Wall came down, West Germany had the capacity to absorb the east.  The other former iron curtain states had institutions and some experience with democracy.  So that transformation was successful.

In Vietnam, Iraq, Afghanistan and elsewhere, our Achilles heart proved catastrophic.  And if America was really serious about imposing democracy, perhaps the Middle East and Israel and Palestine might look quite different. Washington and Adams were generally correct. Only in very special or ideal circumstances can democracy be externally imposed. But will we learn?