Skip to content
Acasa/America, Blog, Harlan Ullman, Regiuni/Defense at risk–but not why you think

Defense at risk–but not why you think 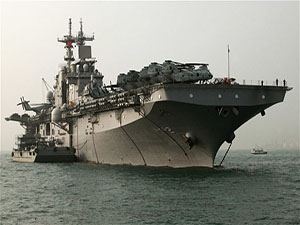 London: To hear the anguished cries of critics of the Obama administration’s defense plans, one would think the nation is disarming.  We are told that at a projected end strength of 450,000 active duty Army personnel, ground forces will be headed to pre-World War II levels.  The Navy, with some 290 ships or less, will be down to the size of the pre-World War I fleet.  Is the sky falling?

Unfortunately, the first complaint is misleading.  And the second dismisses the fighting power of today’s Navy. Worse, the real dangers to the future size and capability of the U.S. military are entirely ignored.

Regarding the size of ground forces, America still has something called the U.S. Marine Corps.  While the Marines will be reduced to about 175,000, that still leaves a total of 625,000 soldiers and marines.  Unless we are planning to go to war with China, that number seems large enough to deal with the full range of possible contingencies.

About a smaller Navy, at the end of World War II, the USN had nearly 6800 ships including 27 large aircraft carriers; 71 smaller carriers; and 23 battleships.  Now suppose a war game set the Navy of 1945 against the Navy of 2015 with its 11 carriers and 280 supporting ships.  Does anyone doubt the outcome?  The point is that numbers alone can be misleading.

Worse, these superficial critiques obscure the real challenges to the Pentagon.  These arise over vital matters of strategy; budgets and costs; and people.  The current strategy is so flexible that spending for any reasonable force level can be justified.  Hence, the case for spending more or spending less on defense rests on other arguments.

The defense budget request for 2015 totals about $700 billion.  Sequestration mandates defense cuts of $50 billion a year for ten years.  But even without sequestration, that budget cannot and will not sustain the current force.  The reason is that inbuilt cost growth for compensation, retirement, health care, weapons systems and equipment is soaring.  Left unchecked, by decade’s end, these costs will grow by about 40%.

Absent a crisis, competing budget priorities will make current levels of defense spending unsustainable.  If they were sustainable, this inbuilt cost growth will mandate substantial cuts in people and equipment by at least a fifth.  When interest rates rise, which at some point they must, greater pressure will be generated to cut discretionary spending even further of which defense gets the lion’s share.

Finally, regarding people, as the nation transitions away from a military that has been at war since 2001, the mundane duties of peacetime that are far less demanding and challenging than preparing for combat will take hold.  That will hurt morale meaning that recruiting and maintaining a highly competent and professional military will be far more difficult.

What can be done?  First, even if the fight against the Islamic State continues indefinitely, it is hard to envisage situations in which the U.S. will need to deploy or have deployed a fighting force of more than 150,000 in two regions simultaneously, totaling about 300,000 active duty personnel.

Working backwards, a total active duty force, backed by reserves, of about 800-900,000 (down from today’s 1.3 million) would be needed to generate this level of deployment.  But to ensure that force is highly trained and well-equipped, escalating cost growth must still be contained.

Congress will balk at trimming pay and allowances.  One consequence of inaction will lead to the so-called “hollow force” such as that which emerged after the Vietnam War.  And it took two decades to rebuild that military.

In current dollars, and if cost growth is contained–a big if, this size force of 800-900,000 could be maintained at about $500 billion a year.  But, if we are serious about sustaining a professional and capable force, both Congress and the public must heed these warnings.

Many will argue that growing Chinese military power must be countered.  Since fighting a land war in Asia is, as former Defense Secretary Robert Gates alluded, “madness,” we have such things as allies in the region to help. And Russia has a substantial border with China as well as thousands of nuclear weapons.

Since the defense industrial base will shrink, a strategy of regeneration and reconstitution is also necessary in the event new threats emerge.

Unfortunately, the political process will resist rational and factual analysis.  Hence, those who decry the military collapsing to pre-world war levels will be right but for the wrong reasons.  If we do not act now, a future  “hollow force” is inevitable.