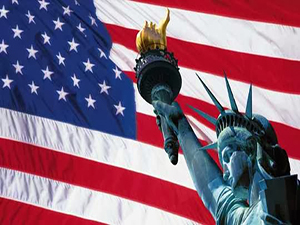 China now exports money.  Russia exports gas and oil.  The Netherlands sends millions of flowers abroad every day.  And, more than occasionally, America tries to export democracy.
The tension over sending democracy abroad has been measured in terms of George Washington’s pragmatism versus Woodrow Wilson’s idealism, the latter elevated to grander status by Jack Kennedy’s solemn commitment to “pay any price and bear any burden” to defend freedom and liberty. All modern American presidents have paid at least lip service to defending freedom and democracy and more than a few have threatened or gone to war to uphold those principles.  A searing question is with what effect?
For the first five or six decades of its existence, Americans went west not to spread democracy to the Indians but to settle and colonize the continent.  Missionaries preached the gospel as far as China but not Jeffersonian democracy.  The Spanish-American War of 1898 left the U.S. with colonies politely called “possessions” in the Pacific and Caribbean that took years to mature beyond fledgling outposts for creating democracy.
Woodrow Wilson’s aspiration to make the world safe for democracy was overwhelmed by two world wars and a cold one.  Fortunately, Franklin Roosevelt and then Harry Truman were determined not to repeat the folly of the allies in pauperizing the Kaiser’s Germany after World War I.  With the Marshall Plan and benign occupations, Nazi Germany and Fascist Japan and Italy became functioning democracies–it took South Korea two decades longer.  But at what cost?
Hundreds of millions perished or suffered in that war.  Countless treasure was spent.  Germany and Japan were physically destroyed–and lay helpless and hopeless subject to the victors’ whim.  These were one off conditions unlikely ever to be repeated.  However, the successes in winning the war and the peace probably convinced many in America’s so-called “greatest generation” that spreading democracy was noble, viable and practical.
Yet, the reality of containing the Soviet Union tempered the thirst for setting democracy among the highest foreign policy priorities.  The U.S. willingly embraced and supported despots and dictators who were prepared to stand with Washington against Moscow.  That preference still exists particularly in the Middle East and Persian Gulf where Islamic radicalism has replaced communism as a key danger.
Dwight Eisenhower knew better than to challenge Soviet armed intervention into Hungary and Poland in 1956 that repressed the attempted revolutions, relying instead on toppling governments unfriendly to America in Latin America and Iran.  It took Ike’s successor, JFK, to cast the jungles, highlands and rice paddies of Vietnam as the battleground for freedom and democracy.  Unfortunately, transitioning from colonial rule to the ballot box as the basis for political power proved far more difficult than anticipated especially when North Vietnam had a vote and, as it turned out, the vote.  58,000 dead Americans and countless Vietnamese casualties later, American intervention turned into a disastrous lost crusade.
The fall of the Berlin Wall in 1989 was a singular triumph, miraculously achieved short of a third world war.  The former Eastern bloc of Iron Curtain states would become part of George H.W. Bush’s vision of a Europe “whole and free.”  Of course, each of these former Soviet satellites had long experience with democratic traditions and the rule of law.  This transition was not achieved by American export of democracy.  Rather, each country was the engine and mechanism for the self-imposition of democracy.
The ill-advised and ill-fated interventions into Afghanistan and Iraq remain testimonies to the folly of trying to impose democracies on cultures and conditions where that simply could never work.  When Vladimir Putin seized Crimea, the U.S. predictably reacted with shock, surprise and outrage.  However, and despite elections, Ukraine is not and probably never will be a real democracy in the American image.
Will future (and current) American politicians learn these realities?  Of course it is essential to support human rights and the rule of law.  Of course it is important to stand for liberty and freedom.  However, exporting democracy as America has tried through several colossally failed military interventions into regions and cultures that reject such efforts will not work–unless the Nazi Germany and Fascist Japan model is used.
George Washington got it right.  While Wilson’s idealism might apply in a near perfect world, that world is light years away.  Beethoven who was deaf predicted that he would “hear in heaven.”  Democracy is the strength and salvation of many countries.  But until we all “hear in heaven,” we best be clever, careful and cautious in trying too hard to export it.
By Harlan Ullman|2017-11-14T21:28:11+02:0027 mai 2014|America, Blog, Democratie & Drepturile Omului, Harlan Ullman, Regiuni, Subiecte|0 Comentarii