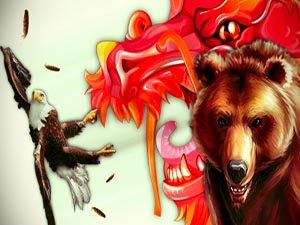 Last week’s geopolitical guidance to politicians was don’t lose wars.  This week’s advice is don’t re-invent Russian bears and Chinese dragons.  Portraying Russia and China as potential or peer adversaries and threats goes back to the Soviet Union’s last leader Mikhail Gorbachev.  “What are you going to do now that you no longer have an enemy?” he asked.

In addition to hosting the most expensive Olympic Games in history, Vladimir Putin’s autocratic Russia has announced major increases in defense spending.  The Old Soviet Fifth Eskadra that deployed to the Mediterranean during the Cold War was replaced with a new Russian Mediterranean force based in Tartus, Syria.  Half a dozen or so Russian war and supply ships are usually on station.  European allies especially those bordering on Russia are increasingly concerned about this buildup.

China continues its military modernization pumping up its defense spending.  New classes of warships and advanced fighter aircraft are on display.  The People’s Liberation Army (PLA) is the largest in the world.  China is deploying its naval forces throughout the Pacific and Indian Oceans and more globally.

The Financial Times ran a long piece last week on the expanding Chinese Navy (PLAN) citing a decade’s old article on what a war with China might look like to make its point. China’s Navy was described as following its growing international trade and investments thus having a more global presence.  Possible consequences of this military expansion could provoke a cold war between China and the U.S. or even a military confrontation.  Some talking heads pontificate about the near inevitability of another Sino-Japanese war.

February is also budget time in the U.S.  As the U.S. withdraws from Afghanistan and is now clear of Iraq, justification for spending in excess of half a trillion dollars a year on defense to keep 1.3 million active duty forces is not self-evident. A fragile economy, mountains of debt and the absence of a “clear and present danger” of existential proportion complicate making the case for such outlays.

A war on the Korean peninsula or pre-emptive attacks to destroy Iran’s nuclear infrastructure, regardless of likelihood, is insufficient to make the budget case for this level of spending.  But a Russian bear emerging from hibernation and a Chinese dragon creeping out if its cave raise more fearsome specters.

NATO was created to deter and contain the Soviet military threat.  Take away Russian tactical nuclear weapons, NATO’s conventional balance of power advantage underlines Moscow’s dramatic military  inferiority.  However, its most recent military exercise in conjunction with Belarus, Zapad 2013, and allegations of cyber attacks into Estonia and elsewhere cause alliance members to worry where Moscow is headed.  Its rearmament intentions confirm these concerns.

Likewise, a more powerful Chinese army and navy are rattling Pacific friends and allies. Asian history is no less peaceful than Europe’s regarding wars and animosities among regional states.  Long-standing territorial conflicts over specks of land in the China seas heighten tensions.

What is needed is a combination of common sense and a willingness to look more closely at Russia and China before jumping to conclusions about new enemies and arms races.  During the Cold War, we had few good insights into the Soviet Union and its military strategy.  Had we, the implosion of the Soviet Union would not have been a complete surprise.  And we failed to understand that the Soviet Union regarded a world war as a fight to the finish in which tactical and strategic nuclear weapons would have been the decisive factor between winning and losing.

Russia has a largely conscript army.  At last report, 90% of its youth were physically unfit for military service.  That can change.  However, Russia is no bear despite Putin’s promise of more defense spending.

China is more complicated.  China’s military spending had to grow if only to pay its 2.3 million active duty personnel living wages.  Yes, China is deploying more advanced systems.  But having the power to project force as the U.S. can is decades away at best.

If NATO is worried about Russia, a new “porcupine” type defense using advanced technology including “Stinger” surface to air missiles (neuralgic for Russian recollections of Afghanistan) could easily and more cheaply make any incursion very bloody. If the U.S. is worried about China, the “air-sea battle” concept to strike deeply ashore with airpower could certainly be replaced with a perimeter defense preventing China from wandering too far off shore against allies whether in Korea and Japan or Thailand and Singapore.

Unfortunately, these strategies need not cost half a trillion dollars a year.  Hence, for many in the industrial-military complex, new ideas that do not require buying hundred billion dollar plus weapon systems are non-starters.  So, bring on the bears and dragons.