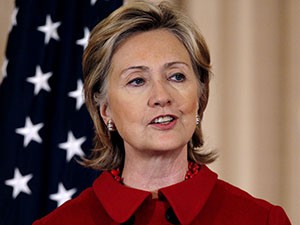 Last Sunday, Hillary Clinton announced her candidacy for the 2016 Democratic presidential nomination. The affair was low key relying on Twitter, Facebook and social media where a video was posted.  The slogan “Ready for Hillary” is the current mantra along with “peace, progress and prosperity.”  In ’08 it was “in for the win,”  “ready for change, ready to lead” and then a batch of other lesser slogans.

But slogans will not win the next presidential election.  The profoundly crucial question is what will it take to become the next president?  Cynics, realists and professional politicians have a simple answer:  270 electoral votes.  As most people may not know, the U.S. still elect presidents in the Electoral College not by popular vote, a constitutional fact that cost Al Gore the presidency in 2000.

Hillary therefore must have a two-pronged strategic approach.  First, she must win the nomination.  Second, she must win the Electoral College.  For the moment, the Democratic field is rather empty.  It was too in 2007 until a junior senator from Illinois emerged and Barack Obama surprised and outwitted his much-favored opponent Hillary.  No Barack Obama is in view.  Still, Hillary must have the ability to run a competent campaign, something she did not do in 2008.

Regarding the general election, historically Democrats can rely on about 242 electoral votes.  Twenty-eight more votes are needed— far less than for Republicans.  As minorities grow in number and women outnumber men, Hillary has electoral base advantages.

Yet, the vital issues for Hillary are not strategic.  Political, personal and policy issues will dominate her success or failure.  Each is interconnected.

Republicans (and Democratic contenders) will attack Hillary on all three.  Politically, Hillary will be savaged over a lack of accomplishments.  The opposition will claim that as First Lady in 1993, she led the train wreck over reforming health care that later turned into Obama care.  They will ask what she did of note in the Senate and challenge her to name one significant bill with her name on it.

As Secretary of State, her famous “reset policy” with Russia including the mistranslation of the phrase and the long list of alleged failures of the Obama administration will provide ample grounds for attack.  If Republicans raise Benghazi to prove her culpability in contributing to the deaths of the U.S. ambassador to Libya and his bodyguards, that could easily backfire as the evidence and facts contradict that allegation.  However the missing private e-mails will be tempting targets.

Personally, the allegations surrounding Bill Clinton’s administration from Whitewater to Monica Lewinski will be fair game especially Hillary’s penchant for secrecy.  The Clinton Global Initiative (CGI) with charges of taking money from unsavory foreign sources and countries will be raised even though the accounting rules may be the culprit.  Several foreign states contributed money on a shared basis to a third party not technically to CGI, not that that matters. And how Bill will behave in the campaign is the wildest card of all.

The one place where Republicans can hit hardest is legitimate if common sense and pragmatism override emotion and dislike of the Clintons.  Policy is her weakest suit.  Here Hillary faces an exquisite paradox.  She was part of the Obama administration.  Yet, she must distance herself without rejecting the policies of this administration.

But what are her economic, social, domestic, foreign, defense and national security policies?  How do they differ from Obama’s and, if they do, why did she not raise them when in office?  Policy is where Hillary is most vulnerable.

Of course, the question of dynastic rule comes into play.  Twelve or sixteen years of Clintons may not be tolerable to many Americans.  And if Jeb Bush wins the Republican nomination, one can bet on an embarrassingly low voter turnout.  The effects on the election are imponderables.

History isn’t helpful either.  After Ronald Reagan’s two terms in office, George H. W. Bush won giving Republicans three consecutive terms.  Were it not for Ross Perot, Bush would have been re-elected and Bill and Hillary might have been history after 1992. In 2008, Senator John McCain lost to Barrack Obama in largest part because of the economic meltdown and George W. Bush’s failed wars in Afghanistan and Iraq during his two terms as president.

About 2016, if Hillary wins the nomination, this could be the nastiest election in a very long time.  Republicans will savage the nominee. And, success and failure will be measured in terms of “Hills, Bills and spills,” meaning stay tuned for the fireworks.