Skip to content
Acasa/Blog/Antonia Colibasanu/Italian Elections: a Wakeup Call for the Eurozone?

Italian Elections: a Wakeup Call for the Eurozone? 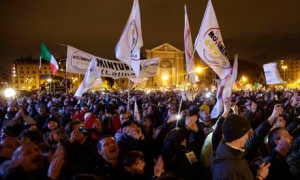 This week Beppe Grillo, the leader of the Five Star Movement, became an international media phenomenon. The movement led by this comedian-turned-politician won more than 8 million votes in the Italian elections of 24 and 25 February, becoming the third largest political force in Italy and the single most popular force for the Chamber of Deputies. Grillo’s success poses questions about the political system in Europe, because his popularity is rooted in the increasing dissatisfaction with his country’s political status quo — a sentiment found in many other EU member countries under economic pressure.

Much has been written about Grillo in the last few days, and with a good reason. To begin with, his political group is not a party but a movement. As such, it has no formal structures (no president, no general secretary, no treasurer). In fact, most of Five Star’s activity takes place online, in Grillo’s personal blog. The movement chose its candidates online, allowing the blog’s users to upload texts and videos with their proposals. To complete this unusual picture, Grillo himself was not a candidate for election.

The “Grillo phenomenon” is explained by the comedian’s ability to captivate an electorate that is tired of the traditional political parties. Italy is mired in its worst recession in two decades, and corruption scandals plague the traditional parties. These circumstances allowed Grillo to move forward with strong anti-establishment and anti-corruption rhetoric. This phenomenon is not entirely new. In the mid-1990s, media magnate Silvio Berlusconi also positioned himself as an outsider who came to “clean” Italy from its traditional politicians. But with the pervasive economic crisis in Europe, the public fatigue with the current political system is increasing, and it’s probable that similar movements will take root and grow in other countries. The evolution of such groups raises the question of how these movements will affect the EU and the eurozone in particular.

But the “Grillo phenomenon” includes a “Grillo enigma.” On March 15, the Five Star Movement will debut in the Italian Parliament. That day, 109 members of the movement will enter the Chamber of Deputies and 54 will join the Senate — most of them for the first time. This will create specific challenges for the movement. First, the Five Star Movement will have to choose between supporting the formation of a new government in Italy and trying to obstruct it. Later, it will have to start proposing and voting on laws, with all the potential political cost that this includes. Finally, the movement will have the difficult challenge of maintaining unity and discipline in parliament. It’s not unusual for Italian MPs to leave their parties and join the opposition.

Only after the Five Star Movement begins maneuvering within parliament will the Italians — and the rest of the world — begin to understand the movement in more detail. The movement’s platform is relatively vague, with some proposals on issues such as energy, ecology and electronic government. But a wide variety of subjects, especially regarding foreign policy, remain a mystery. One of the most sensitive issues is the movement’s position regarding the euro. Grillo said that, in his personal opinion, Italy should abandon the common currency, but he also said that the best idea is to ask the Italians in a referendum.

This kind of ambiguity is what worries the rest of the European Union, especially Germany. Grillo has shown that anti-establishment rhetoric can be electorally successful — something that could have a ripple effect elsewhere in Europe. During the campaign, and especially after the elections, German and EU officials expressed concern about the political role of the Five Star Movement. Far from weakening it, external criticism strengthened the Five Star Movement and even gave it an anti-German angle that it didn’t necessarily have before the elections.

In truth, it was Berlusconi — not Grillo — who had more markedly anti-German rhetoric. Even the Democratic Party promised to soften the austerity policies implemented by the technocratic government of Mario Monti. To greater or lesser degree, the three main parties that contested the Italian elections were against the austerity measures designed by Brussels. As a result, regardless of who governs Italy from now on, Rome will be under strong social pressure to soften the policies that were implemented last year. This augurs an Italy that will increasingly seek to align itself with France, a country that is beginning to feel uncomfortable with the German management of the crisis. Interestingly enough, the French response to the Italian elections was much quieter than the Germans’.

Naturally, governments do not operate in a vacuum, and any Italian Cabinet will work with one eye on the domestic situation and the other on the international markets. The European crisis has shown that most eurozone governments operate with less and less room to maneuver and under pressures that are often contradictory. Even the German government must deal with conflicting pressures, since its efforts to keep the eurozone afloat often conflict with the domestic sentiments against the bailouts for countries in the European periphery. These contradictions will become particularly visible in this election year for Germany.

The elections in Italy have become a warning for other eurozone governments, not only because of the performance of the Five Star Movement, but also because of the political fragmentation that the economic crisis has generated in this founding member of the European Communities. The political consequences of the economic crisis have already affected Greece, with its mainstream parties substantially weakened and anti-establishment parties on the rise. The elections in Italy have put the political turmoil much closer to the core members of the EU.