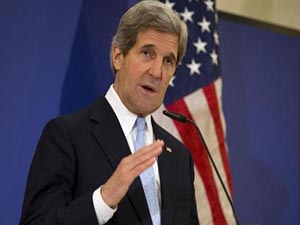 The current buzz in Washington’s bazaars is questioning whether the peripatetic Secretary of State John Kerry is determined or delusional in his multi-faceted quest to solve among the most intractable of global conflicts.  Some see Kerry as a 21st century Don Quixote tilting at windmills. Except, these windmills can bite back.  Others applaud his doggedness and courage to persist.
So far, a dozen trips to the Middle East to broker a deal between Palestinians and Israel have not achieved that outcome.  Russian help in removing Bashar al Assad’s chemical weapons from Syria was indeed a welcome and positive step.  But the Syrian civil war grows no closer to ending and the blood bath, driven off the headlines by the mysterious disappearance of a Malaysian airliner, continues.
The jury is still out on the end state of negotiations with Iran to prevent Tehran from developing nuclear weapons.  Putin’s assault into Crimea and its annexation, along with an economic crisis in Ukraine, have created new worries about Russia’s motives among European allies. With reportedly tens of thousands of troops stationed within striking distance of eastern Ukraine and the military assessment that Russia could overrun part of that country in days, some believe a new cold war or at least a cool one has broken out.
Against that background, the State Department’s Inspector General has released several reports about possible mismanagement inside Foggy Bottom.  The prior two secretaries of state were not particularly good managers as that was not their strong suit.  And the confirmation process has been slow in approving key appointments.  That said, critics question whether Secretary Kerry’s travels have prevented better management of the State Department.
A few critics now downplay the importance of the Arab-Israeli-Palestinian conflict calling it a regional matter.  These critics argue that Syria and indeed the Far East are more important.  Resolving the Middle East imbroglio is thus seen as both impossible (or highly improbable) and eccentric to higher priority issues.  Unfortunately, that argument is profoundly flawed.
Many of the political, cultural and religious tensions in the Middle East, Persian Gulf and South Asia have their roots in this conflict.  Finding a verifiable and viable solution to the Arab-Israeli-Palestinian impasse would indeed be a game changer.  Recognition of Israel by the Arab and Muslim worlds would put a huge dent in the attraction of fundamentalist hatred of the Zionist state.  In particular, Saudi Arabia has much to gain in that regard by denying Sunni extremists any leverage in exploiting that conflict through recognition of Israel.
Hence, the Washington game to find and assign blame irrespective of fact or truth continues.  Is Kerry a grandstanding secretary out to burnish his image?  Is he embarked on missions impossible?  Or, as he has done in the past, is he determined to taking on the toughest issues no matter the consequences?
First, Kerry is absolutely correct in focusing on the Middle East peace process.  If this conflict is not resolved in weeks or months, it will be decades at best before another opportunity arises.  And the world will not be a better place.
Second, Kerry has several aces to play that could run the deck.  The first includes the Transatlantic Trade and Investment Partnership (TTIP) and the Trans-Pacific Partnership (TTP).    TTIP is probably the more important.  Despite opposition by his own party in the Senate, TTIP will increase the GDP’s on both sides of the Atlantic by hundreds of billions of dollars annually.  Agreement will be a real game changer.
Negotiations with Iran, if successful and that is a big if, are likewise a game changer.  Despite the Sunni-Shia and cross-gulf rivalries with the GCC states, enticing Iran back into the international community must reduce tensions.  While the odds against successful TTIP and Iranian nuclear negotiations may be long, either or both have the potential for turning into great diplomatic triumphs even if the Israeli-Palestinian talks falter or fail.
One place where Kerry could seek some help is hiring a second in command at State to assist in running the department while the secretary is dealing with crises that seem to grow in number with the passage of time.  Former State Department stars such as Ambassadors Thomas Pickering and John Negroponte are models for that role even though both have retired from active service.  And a top notch CEO could fill the bill.
Until the administration lands a major success in foreign policy, and the Afghan elections are unlikely to meet that criterion, critics will continue to cast their slings and arrows at the secretary.  But a word of advice is important–press on John; press on!
By Harlan Ullman|2017-11-14T21:28:15+02:009 aprilie 2014|America, Blog, Guvernare globala, Harlan Ullman, Regiuni, Subiecte|0 Comentarii