Peace, prosperity and stability through partnerships: a grand design for a 21st century strategic mindset 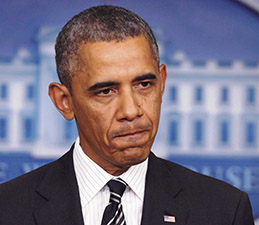 Most American presidents, from George Washington to George W. Bush, have been accused of and attacked for having the wrong strategy.  Of post-World War II presidents, Barack Obama has perhaps been most assailed for having no strategy.  His seeming reluctance to take a stand and stand up for it under pressure has likewise drawn harsh criticism.

Leading from behind in Libya; demanding that Syrian President Bashar al Assad leave office; and drawing “red lines” to deter Assad’s use of chemical weapons are evidence used in the court of public opinion to prove presidential lack of spine.  But the world is a complicated and violent place.  Washington, Lincoln and Franklin Roosevelt would have found today heavy going.

With the hundredth anniversary of World War I’s start commemorated last week, events from Ukraine, Egypt, Gaza and Iraq to the China Seas have caused serious people to ponder if a replay of 1914 is looming just around the corner.  Throw in the potential for an Afghan-Pakistani-Indian meltdown and the vagaries of North Korea’s enfant (very) terible, the argument for a global calamity takes on a cloak of reality.  Meanwhile, world stock markets have been tumbling.

Under these conditions, creating and then executing a successful strategy and foreign policy are made more difficult by the absence of a common theme that relates ends and means in a cogent and readily explainable and understandable way.  Defeating an Axis enemy that started a world war and containing and deterring an adversary afterwards who might have done the same made defining aims and objectives fairly straightforward.  Today, my enemy’s enemy could easily become my enemy and not my friend. The tensions between protecting civil liberties at home and safeguarding the nation from another September 11th attack have become exquisite.  In these circumstances, a new or at least more relevant strategic mindset is crucial.

Add in the animosity and dysfunctionality of a government in Washington that is badly broken, who in their right mind would run for high office?

Clearly, many will.  But of those many, who has the vision, the depth and the courage to propose a new mindset given the state of today’s politics that rejects or restrains honest debate and genuine dialogue relying instead on the polarizing Bush 43 mantra of “are you with us or against us?”   The answers should worry most of us.

That said, given the turmoil abroad and gridlock at home, several major objectives remain clear.  However trite, peace, meaning an absence of war and the containment of causal factors that could precipitate war, must be a principal focus.  Second, one means to curtail the grounds for conflict and to address the sources of desperation that often offer no alternative except violence and terror, is through prosperity on a global scale.  To achieve both, stability must be the interim goal meaning the further reduction of potential casus belli.

Military force has often been the ultimate arbiter between war and peace.  However, that past paradigm has surely been challenged in the 21st century.  As the West should have learned (or for that matter everyone else), in Afghanistan and Iraq the most capable and competent armies, navies and air forces in the world alone could not defeat enemies who possessed none.  ISIS/L are repeating that experience in Iraq.  Second, maintaining advanced military forces manned by highly professional men and women is exceedingly expensive.  Given the incomplete recoveries of many economies including America’s, the costs of maintaining even today’s level of forces without a major provocation or threat will not be financially sustainable.

Hence, partnerships are essential where common interests or like-minded values constitute the basis for strategy from economics, environmental safeguards to defense and protection of people against acts of both man and of nature. Interestingly, the precursor to this strategy was born fifty years ago with President Richard Nixon and the doctrine that bore his name.  Simply put, the U.S. assumed the lead for global stability and overall deterrence and containment of communism.  Regional states were to assume more responsibility for their areas.

Today, the best place for applying these objectives and creating a strategic mindset for the 21st century is through the world’s most successful military alliance–NATO.  To do so, that partnership must be expanded in scope.  The Transatlantic Trade and Investment Partnership is one example which, when approved, can achieve that economically.  And other areas from cyber to infrastructure protection can do the same.

But as this column has asked on occasion, who shall listen?  And who shall lead?