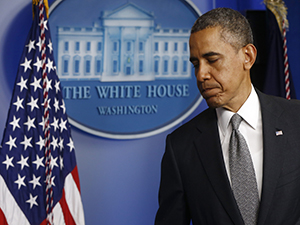 President Barack Obama and his administration are taking heavy fire over accusations of failing to lead in foreign policy.  Whether in Washington or global capitals, the White House is being vigorously condemned and chastised for indecision and for abdicating America’s role as the so-called indispensible power.
“Leading from behind” in Libya, failing to act after setting a “red line” in Syria over the use of chemical weapons, allowing Vladimir Putin free reign in annexing Crimea and dealing with civil war in Iraq are among the arguments citing Obama’s indecisiveness and ineffectiveness.  The result has been a perceived diminution of American power and influence and of Washington’s authority to command respect and instill even a bit of fear through its policies.
But these critiques miss the most crucial points.
First, these complaints reflect historical amnesia about how perceptions of American power and authority have waxed and waned.  Second and more seriously, the potentially fatal flaws in Mr. Obama’s decision-making process have been ignored.  These flaws should preoccupy the White House. Lack of competence along with the inability to execute policy is what should really worry observers most about the Obama White House.
If global leaders are unhappy with the United States, have the 1970’s and Vietnam and Watergate been forgotten?  America’s international standing was in tatters.  The Soviet invasion of Afghanistan in 1979 and the failed attempt to rescue 54 Americans held hostage by so-called Iranian students in the U.S. embassy in Tehran that year did not help America’s image and helped lead to Jimmy Carter’s defeat in 1980. Ronald Reagan’s deployments of cruise and ballistic missiles in England and Germany set both publics and Catholic bishops in a frenzy of protest in the early 1980’s.
Perceptions and popularity of the United States have always experienced a roller coaster ride.  Events can catalyze nearly instantaneous changes of opinions about America one-way or the other.  As long as the U.S. remains the world’s strongest economic, financial and military power, predictions of its demise are premature at best.  Unfortunately, the same does not apply to matters of competence and the ability to execute policy.
From the 2009 Afghanistan-Pakistan (AfPak) study to the recent West Point speech, this White House has, with a few exceptions, been unable to demonstrate real competence in making or in executing its policies.  The “New Start” nuclear agreement with Russia; cajoling Bashar al Assad to forgo his chemical weapons; and the bin Laden raid were high marks for the administration. But, from the catastrophic rollouts of the strategic pivot to Asia and the Affordable Health Care Act to a seemingly trivial lapse in exposing the identity of the CIA station chief in Afghanistan, incompetence has been a hallmark of Mr. Obama’s tenure.  And the scandal over the Veteran’s Administration has not helped either.
In fairness, a government broken by vicious partisanship and a regulatory morass that probably would have made the old Soviet Union look like a capitalist paradise cannot escape blame.  American politics are no longer about governing.  They are about getting elected, re-elected and re-re-elected. Because of globalization and the diffusion of power amplified by the information revolution today’s issues, crises and problems would have tested the best of statesmen from Washington and Pitt to Franklin Roosevelt and Winston Churchill.
With two and a half years left in his term, “No-drama” Obama is unlikely to change his modus vivendi.  However, four opportunities can reverse perceptions of failing to lead whether in front or from behind.  The first is exploiting the forthcoming September NATO Summit and transform the alliance for the 21st century post-Afghanistan, post-Ukraine and in light of events in Iraq.  So far, the summit has been eclipsed by more pressing issues.
Second and third are ensuring the enactment and approval of the Transatlantic Trade and Investment Partnership (TTIP) and the Transpacific Trade Partnership (TTP).  Both pacts will provide extraordinary momentum to restarting economic growth and prosperity that will redound to the advantage of all.  But, with the November Congressional elections pending and obstruction from senior members of his own party, Mr. Obama needs a creative strategy to ensure success.
Fourth is obtaining a verifiable agreement with Iran to prevent Tehran from acquiring nuclear weapons
Make no mistake: whether or not the White House can overcome its lack of competence and its inability to execute policy will be the defining measure of Mr. Obama’s presidency.  If the answer is no, then these flaws will be fatal to his legacy.  The NATO Summit will be the first indicator of what lies ahead.
By Harlan Ullman|2017-11-14T21:28:09+02:0017 iulie 2014|America, Analize si studii, Blog, Harlan Ullman, Regiuni|0 Comentarii