Roles of EU and US in Israel-Gaza conflict 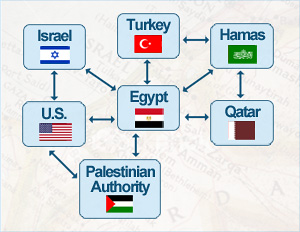 In the past few days, we’ve observed Gaza and hoped for an ending of the current conflict. I was writing last week that it is regional powers that will be the main drivers of a potential cease-fire, considering that the current foreign policy focus of the EU members and the U.S. is elsewhere. Cairo is indeed mediating the cease-fire talks. However, recent interesting moves from Washington and Paris allow us to better understand the challenges of the current situation.

U.S. Secretary of State Hilary Clinton, en route to Cambodia, made a stop in the region, but this does not necessarily mean the United States will get involved in the conflict. Clinton’s trip to Israel is mostly related to Tel Aviv’s need for the U.S. to obtain guarantees from Egypt. In this sense, Cairo is both mediating and representing Hamas during the talks with Clinton. The United States also has been internally discussing the possibility of a $1 billion debt relief package aimed at helping the Egyptian economy — in addition to its regular annual $1.3 billion in military aid.

Israel is continuing to take a conservative approach, and Clinton’s visit appears to have delayed an Israeli ground operation, at least temporarily. However, the bus bombing in Tel Aviv today, which would be the first attack on civilians in Tel Aviv since a suicide bombing in April 2006, will clearly complicate matters.

Meanwhile, the economic crisis in Europe leaves little room for European governments to be active in foreign policy outside Europe. But as I was talking with my colleague, analyst Christoph Helbing (who is also commenting on the EU budget challenges – for those interested), I found that France is trying to assume a leadership role for Europe in negotiations over Gaza.

French Foreign Minister, Laurent Fabius visited Jerusalem and Tel Aviv on Nov. 18, where he met with Israel’s Prime Minister Benjamin Netanyahu, Foreign Minister Avigdor Lieberman and Defense Minister Ehud Barak. Fabius was also expected to meet Palestinian President Mahmoud Abbas in Ramallah. Today, Fabius also blamed Iran for Gaza conflict, in fact underlying what Stratfor explained in its diary yesterday: “As more reports of a possible cease-fireagreement come out of Israel, the question of how many long-range rockets Hamas has in its arsenal remains unknown. Ultimately, these rockets will determine whether a truce is imminent.”

It seems that while France has lost to Germany in terms of economic leadership, it still is striving to be a leader in European foreign policy. This was apparent during the 2011 military intervention in Libya, which France and the United Kingdom pushed hardest for.

Paris likely also has direct national security interests in mind when trying to mediate between Israel and the Palestinians. The country has the largest Muslim and Jewish populations in Europe. The attack by a self-proclaimed jihadist on a Jewish school earlier this year reminded France of its challenge in ensuring peaceful relations between its religious communities. A ground operation in Gaza could lead to large protests in France, especially considering rising youth unemployment and a possibly stronger sense of solidarity among Muslims after the Arab Spring.

Further, considering the developments from the past week, Paris will likely be rethinking its strategy for Syria. France is one of the strongest critics of Assad’s regime. Since last week it is the first country to formally recognize the Syrian opposition coalition led by Mouaz al-Khatib. Paris also called upon the EU to reconsider its arms embargo against Syria in order to arm the Syrian opposition with defensive weapons. This would be a lengthy process, and the EU is unlikely to lift this embargo, especially considering the current developments between Israel and Hamas. Ensuring that the Syrian opposition doesn’t turn against Israel but stays focused on overthrowing the Assad regime is likely one of France’s main worries currently.

With the current conflict between Israel and Hamas, Syria is getting less attention. However, it appears pressure on Assad is mounting considerably and the rebels have made important advances over the past weeks. Turkey, who has asked its NATO allies for deployment of Patriot missiles today, is clearly very worried it is about the developments in Syria.

The Europeans are presently trying to re-establish ties with countries along the Mediterranean after last year’s upheaval. Establishing good relationships with these countries is important to indirectly ensure security in Europe. An example is last week’s visit by EU officials to Egypt, where they promised to provide loans and grants to the new government worth 5 billion euros.

A solidarity movement across the Arab world against Israel would put the Europeans in a dilemma since they would have to balance between maintaining a stable relationship with Israel and the U.S. as well as the new governments in the Middle East.

Thank you, Christoph Helbing for the interesting discussion that helped writing