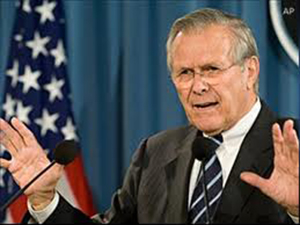 Don Rumsfeld is on tour touting his newest book: Rumsfeld’s Rules, a compilation of lessons accumulated over fifty years of public service.  Mr. Rumsfeld has the distinction of being both America’s youngest and oldest secretary of defense, presiding over three wars—winding down Vietnam and during the past decade, overseeing the conflicts in Afghanistan and Iraq. But it is actually Rumsfeld’s previous book, Known and Unknowns—A Memoir that is more relevant regarding the state of American politics today.

Towards the end of that book (and his time as George W. Bush’s secretary of defense), Rumsfeld forwarded a memo to the National Security Council calling for a commission to address what he saw as an international security system incapable of resolving major global issues and a national security process that, likewise, was desperately out of date.  Similar calls for action have appeared in these columns and were equally disregarded.

Today’s American national security process is still largely organized in post World War II and Cold War terms and captive to a broken government; the Constitution and a law passed first in 1947; White House inexperience; and a large and often unworkable bureaucracy.  Today’s battle over funding or shutting down the government and in several weeks time extending the debt ceiling form exhibit A of broken government.  And this malfunction is not helped by what have become nearly irreconcilable contradictions in the Constitution between Article I—the Legislature—and Article II, the Executive.

The Constitution originally intended that Congress would be the leading branch making the laws to be executed by the President.  The Constitution did not anticipate nor mention the role of political parties.  And by giving Congress and only Congress the sole right to declare war and to appropriate money and specifying the President as commander-in-Chief, the Founding Fathers did and could not anticipate how politics would evolve and how the contradictions over power between the two branches could become destructive.

The prospect of thermonuclear war when a president could have only minutes to order a counter-attack if Soviet nuclear missiles were racing to strike targets in the U.S. took Congress out of that war-making process.  The open-ended Tonkin Gulf Resolution that accelerated U.S. entry into the Vietnam War ultimately led to the War Powers Act that limited presidential authority to use force.  Similarly, the resolutions authorizing force in Afghanistan and Iraq aroused Congressional ire when the latter became a fool’s mission to eliminate weapons of mass destruction that did not exist.

Prior to what could be a diplomatic breakthrough in resolving the Syrian crisis by eliminating Bashar al Assad’s chemical weapons stockpile, President Barack Obama went on nationwide television to announce two quite contradictory decisions.  The first was his decision to use force to deter and degrade Assad’s chemical weapons.  The second decision, almost certainly taken after British Prime Minister David Cameron’s attempt to win a Parliamentary resolution to use force was soundly and ignominiously defeated, was to secure Congressional approval prior to an attack.  Fortunately, diplomacy intervened and perhaps the president has a reprieve.

The National Security Act of 1947 as amended, “unified” the military services in a single Department of Defense while establishing a separate Air Force along with the Central Intelligence Agency and created a National Security Council that consisted of the president and his relevant cabinet officers as the locus for decision-making.  And over time, greater and tighter control of the national security decision-making process consolidated in the White House and the presidential staff.  Centralization would have worked provided successive White Houses always had qualified advisors with requisite expertise to run the process.  Instead, decisions have become the domain of non-confirmed presidential confidantes who, along with the last three presidents, entered office lacking experience and knowledge in national security essential to sound decision-making.

Further, the bureaucracies have grown like Topsy with many committees and sub-committees engaged in endless meetings too often marked by indecision.  And consultation with Congress has been at best uneven and too often informative after the fact and not consultative beforehand, harming decision-making.  Today’s crises require immediacy, dexterity, flexibility and agility that remain missing in action.  And the Unified Command Plan that established the American worldwide military structure is still too reflective of the Cold War and static thinking to respond to today’s challenges.

As Rumsfeld recommended in his memo, a commission is desperately needed to examine, alter and propose long overdue fixes to the national security decision-making structure and process.  Sadly, most commissions fail.  Even the September 11th Commission, unique in the quality of its analysis and recommendations, was stymied by bureaucratic resistance to change.

That said, a serious review is needed now.  Otherwise, the process will remain incapable of assuring the nation’s security when perhaps that need was never greater.