Some Balkan nuances of Brussels’ foreign policy agenda for 2013 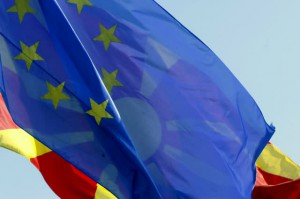 During a search for updates on latest news from Skopje, the words of actor Vlad Jovanovski stood out from the pages of Macedonian “Utrinski Vesnik” newspaper, as the rough translation of his phrase portrays “the Macedonian people as someone who sits on a volcano that could explode at any moment.” This is not new, nor does it describe only Macedonia. The “powder keg of Europe” metaphor defined the Western Balkans as early as the beginning of the 20th century.

We may argue that a lot has changed since. However, geography stays the same, shaping up history in circles and maintaining the intrinsic link with ethic identity.

We may argue that a lot has changed since. However, geography stays the same, shaping history’s cycles and maintaining the intrinsic link with ethic identity.

I have spent a lot of time in the last year trying to understand the way the economic crisis affects the EU “way of life” – from business to social and foreign policy. At the beginning of 2013, I’ve found myself wondering about the challenges for Brussels’ foreign policy in the months to come. The most interesting item on the agenda will probably be the free-trade agreement between the US and the EU. The UK made it a priority for the G8 and Ireland, while at the presidency of the EU will likely support the idea as well.

The other item of importance on the EU foreign policy agenda is related to immigration and movement of people in Europe. There are rumors that the EU could lift its visa liberalization program with the Balkan countries. The British right-wing has announced on Dec. 8 that it will campaign against liberalizing the visa status of Bulgarian and Romanian workers in the UK. And every single nationalist party in Europe is against Schengen.

This, along with the clearly diminishing attention that countries in the Western Balkans are getting from Brussels, made me curious about the latest news on the recent protests in Skopje, making me wonder if they could be the beginning of something bigger …

I don’t have the answer yet, even if things have calmed down during the last few days and two of the political parties in the country – the New Social Democratic Party (opposition) and the Democratic Union (part of the ruling coalition) – proposed holding a meeting between parties’ leaders to seek consensus and solve the political crisis. As always in the Balkans, things are “more complicated.” And Macedonia is just another example in the region.

Unlike other countries in the former Yugoslavia such as Croatia, Serbia and Bosnia Herzegovina, Macedonia’s transition of independence after the collapse of Yugoslavia was relatively calm. However, ethnic tensions between ethnic Macedonians and ethnic Albanians exploded in 2001, spawning a civil war, that, while not as bloody as in other states of the region, has political consequences that are still visible. Macedonia also enjoyed a peaceful resolution of the conflict after the Ohrid Agreement. Therefore it has had better conditions than the rest from the very beginning – and has had the promise of EU and NATO membership for longer than most countries in the neighborhood. Macedonia also enjoyed some economic development after the crisis resolution in 2001. All this should have created the foundation for positive evolution. But the positive circumstances failed to translate into benefits for the population. And the relative peace and stability in the country made people less concerned about security than about economic well being that appeared to elude most of the population for the last decade. These “simple” facts remain at the basis of the growing dissatisfaction with the current status quo.

Macedonia now faces three overlapping problems: the popular discontent with the ruling elites, an intense political infighting among these elites and a reassertion of ethnic divisions. These are common concerns for all Western Balkan countries. This is why, while we may consider protests as natural, given the growing discontent of the population in countries like Macedonia one always needs to be cautious about nuances … as it is those nuances that could reveal the “frozen conflict” between different ethnic parties or different social classes. It is these subtle nuances that contribute enormously to the weakening of the state in Macedonia and elsewhere in the region, something that should specifically be on the radar of the EU and even NATO.

Regression in any country in the Western Balkans, the “boiling volcano” or “powder keg” of Europe, needs to be on the EU foreign policy agenda for obvious reasons. But, in the end, this may be just another fear related to what may happen in the near future – while the euro crisis still gets most of the attention of the EU leaders.