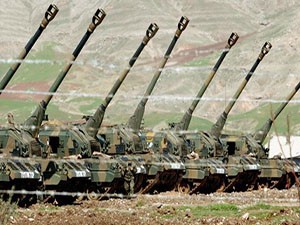 Windsor Castle, London: Russia’s military intervention in Syria has opened a Pandora’s box of potential crises and frightening scenarios as well as hinting at the slimmest glimmer of an opportunity.  Backing Bashar al Assad along with Shia Iran, Russian President Vladimir Putin has, knowingly or not, declared a de facto war against the Sunnis.  Certainly Saudi Arabia thinks so.  Many Saudi clerics have issued fatwas targeting Russia for Jihad.

Russia’s Syrian military deployment is relatively modest.  Several dozens of fighter aircraft, attack helicopters, a small naval armada in the Mediterranean led by a three and a half decades old cruiser and 2000 ground forces supported by anti-air and other defensive systems is not, by any measure, substantial. Nor has the number of Russian air and missile strikes been significant. Yet, the political and geostrategic impact of Putin’s actions far exceeds what Russia will or will not achieve militarily in Syria.

For the moment, Putin is running circles around the White House. Twenty-six Kalibr land attack cruise missiles were initially fired from small naval escorts in the Caspian Sea to strike targets in Syria nine hundred miles away.  This display of Russian military prowess captured the attention of many militaries especially in Europe.  That four missiles may have crashed in Iran—as well as the actual effectiveness of the strikes — surely raises questions about that prowess. However, Moscow’s public relations packaging of this intervention has been impressive so far.

But — and this is a big but— Russia’s expanded military operations in Syria increase the risks of an incident in which de-confliction (meaning preventing Russian and Western forces from inadvertently clashing) fails and some catalytic escalation follows. Russian aircraft reportedly have violated Turkish airspace.  If that violation became serious enough, Turkey could legitimately and legally respond by shooting down the offending aircraft. What would Russia do?  And what would NATO do given Article 5, the centerpiece of the alliance that specifies an attack against one is an attack against all, if Russia were to “retaliate” against Turkey should a shooting incident occur?

Beyond that, how will the Sunni Arab world respond?  What actions will the U.S. take to neutralize and discredit Russian support of Assad?  And what unintended consequences that no one has predicted arise?

Two historical events form bookends that bound the range of possible contingencies.  If this turns out to be a proxy war between Sunni and Shia and Russia and Syria’s adversaries, could the Spanish Civil War of 1936-39 be relevant? The Spanish Civil War was fought between Loyalists (or Republicans) supporting the regime and fascist nationalists led by General Francisco Franco.

Nazi Germany and its allies supported the latter.  The Soviet Union along with foreign fighters from the U.S. and the West came to the aid of the government.  The Nationalists won. Unlike the Spanish Civil war, Syria is closely linked to ongoing crises in the region from Libya to Iraq with other neighboring states caught in between.

The other bookend was the assassination of Archduke Franz Ferdinand and his pregnant wife Sophie on June 28th, 1914 that triggered World War I.  Austro-Hungary was granted free reign by the Kaiser’s Germany to attack Serbia.  Russia began mobilized and the rest is tragic history.

Putin is neither historically nor strategically ignorant.  He is however arrogant and could push the U.S. and west too far.  On the other hand, if Putin’s intent is give the Assad regime some breathing room that leads to a negotiated settlement, active Russian military engagement could be the grounds for a tiny sliver of hope however unlikely.

What happens almost surely will fall between these bookends.  If Assad/Putin prevails, rebuilding a broken Syria will take decades.  And would Russia commit billions of rubles to that end?  Probably not.

No one wants a catalytic war. Putin must understand that while the Obama administration may not speak softly, U.S and NATO militaries are a big stick.  That message must be delivered unambiguously by a very senior U.S. official and soon. And the Pentagon knows how to back up that message and flex its military muscles in an unmistakable yet understated manner.

Finally, let’s cool the rhetoric for a bit.  Lecturing Russia on how dangerous and wrong this intervention is reinforces Putin’s gambit.  However, issuing a few reminders of how the Soviet Union fared in Afghanistan from 1979-89 does not.

Statecraft, creativity and imagination, not bluster, are needed.  Perhaps the White House can create a geopolitical and diplomatic initiative equal to Russia’s dramatic Caspian missile launch.  Now that would make a real difference.