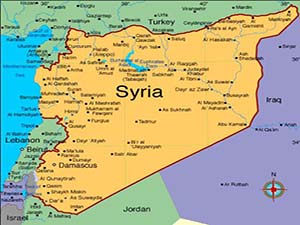 Last week, the Brookings Institution in Washington, D.C. hosted a session on Syria and the Middle East.  The speakers largely agreed that more active engagement by the Obama administration from increasing humanitarian assistance to arming the opposition was needed and needed now.  The argument was based on the civil war spilling over and destabilizing the region with many foreign fighters trained in Syria finding their way back to the West.  One participant proposed waging a “Charlie Wilson” type of guerilla action with the Syrian Free Army cutting the government’s supply lines and attacking its air bases as a means of forcing the Assad regime to negotiate or to leave office as the opposition continued to make gains on the ground.
Former British Chief of Defense Staff General Sir David Richards and Conservative MP Brooks Newmark have envisaged a more sensible, alternative strategic engagement plan.  However, both the British Parliament and American Congress are opposed to muscular involvement in Syria.  Hence, the civil war almost certainly will continue and tens of thousands more Syrians will perish over the next months.
But the Brookings session did provoke me to wonder whether the Syrian civil war was the strategic center of gravity for restoring stability to the region? Or, was the civil war principally a tragedy that eventually will run its course and is secondary to more pressing regional issues. My conclusion is that Syria is more tragic than strategic and the immediate center of gravity is the nuclear negotiation with Iran.  Beyond that, the broader strategic crisis is the Arab-Israeli-Palestinian conflict that will determine future peace or instability in that part of the world.
Syria then must be considered in the context first of the outcome of the Iranian talks.  If the talks lead to a timely, credible and verifiable agreement that guarantees Iran will not obtain nuclear weapons, a range of new options for Syria will open. If negotiations fail directly or if Iran delays to the point where negotiations are no longer viable, alternative plans of action for resolving the Syrian civil war will be needed.
In the case of success, will that lead to a rapprochement with Iran?  If so, can Iran be induced to restrain Hezbollah in Syria on the grounds that the civil war will destabilize the region and breed many Sunni Jihadis that will be to no one’s interest?  Or, will this be simply a transactional exchange—no nukes for no sanctions?
If for whatever reason negotiations fail, how then can pressure be applied to Syria and the Assad regime to reach an accommodation with the opposition?  Under those circumstances, a more aggressive strategy has merit.  The West should begin arming the opposition realizing that it will take about 18-24 months for a force of 100,000 to be trained, equipped and made ready for action.  This should be done discreetly so that the news will have greater impact when it leaks.  At the same time, the West should discreetly inform the Assad regime (and the Russians) that unless negotiations proceed, when this force is ready, Syrian air superiority will be eliminated.  Whether a Charlie Wilson-like operation can be mounted is a separate issue.  At least one can be threatened. And the Syrian Free opposition must take steps to crack down on the al Qaeda and related Sunni terrorist organizations.
The more interesting question harkens back more than forty years to Richard Nixon’s triangular politics that engaged China as a counterweight to the Soviet Union.  Is there a parallel using Iran to counter balance Saudi Arabia without reference to China or the Soviet Union and could the U.S. pull this off? Or, is this idea naïve and even absurd?
For example, if the nuclear negotiations succeed, could Iran be convinced to recognize Israel?   Perhaps over the top but the idea is worth at least a thought or two.  If the Iranian-Israeli hostility is reversed, can that have positive leverage with the Arab world?  Or would such an overture drive the Sunni Arabs to greater confrontation with Israel and the West?
For the moment, these questions are unanswerable and possibly beyond any likelihood of ever being asked.  However, the Middle East and Persian Gulf are tinderboxes.  While the Syrian civil war may not have profound strategic impact or affect the vital interests of the U.S. and the West, it surely is a tragic example of the inherent limitations of ending civil war and the wholesale slaughter of innocents.
When confronted with an intractable problem, President Dwight Eisenhower believed that solution often rested in making that problem “bigger.”  In other words, enlargement could create innovate solution.  Surely it is worth the intellectual effort to expand the Syrian problem and make it bigger.  And perhaps solution may be found in that approach.
By Harlan Ullman|2017-11-14T21:28:22+02:0017 februarie 2014|Blog, Harlan Ullman, Orientul Mijlociu, Pace & Securitate, Regiuni, Subiecte|0 Comentarii