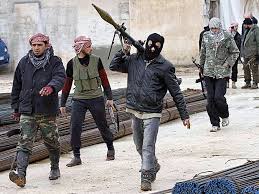 Doha, Qatar:  Syria is dying.  A further tragedy is that there is little the outside world can do to end that war. The struggle between Bashar al Assad’s Alawite-Shia regime and the largely Sunni opposition has already claimed upwards of 80,000 lives and turned hundreds of thousands into refugees seeking shelter in less dangerous parts of Syria or in neighboring states.  A British Member of Parliament who knows the region well believes that if Assad defeats the opposition, at least 100,000 will perish.  And if Assad goes, that number could double or triple in the ensuing bloodbath.

Despite powerful domestic pressure to act, for the United States and other Western powers, every option is bad. Some are worse.  Not knowing the strength and intentions of both the regime and the hydra-headed opposition is the first of many unresolvable problems.  Since Assad has nowhere to go, he will cling to power for as long as possible.  Yet, is Assad prepared to negotiate as a means of retaining some measure of power and authority even if that led to a divided state?

Regarding the opposition, it is so diffuse and divided that assessing how any future leadership may evolve is currently a guess.  If history pertains, as the French, Russian and Chinese revolutions demonstrated, the ultimate winners will be the most ruthless, ideological and best organized.  The Nazis won office in interwar Germany through the ballot box—a caution that democracy is far more than simply elections.  Thus, should the Syrian opposition win, history suggests that the elements most hostile to the west and most compatible with Islamic extremism are likely to dominate.

Washington and President Barack Obama therefore confront a series of very bad choices.  Even if supporting Assad would end up killing lesser numbers of Syrians, politically that is impossible for the U.S. Demanding that Assad stand down has about the same effect as King Canuck had in rolling back the oceans.  Arming the opposition or establishing no fly zones most likely would accelerate Assad’s fall and the likelihood of radical groups gaining power.  With Assad gone, a Sunni pogrom against past regime members and supporters is a very possible outcome given the levels of hatred and motivation to seek revenge.

Some argue the moral case for intervention.  Assad is killing hundreds of innocents every month.  Civilized states cannot tolerate that conduct.  Thus, as in Libya, the U.S. must side with the opposition to force a regime change even if that means hastening the ascent of more hostile elements to controlling Syria.

A ground force intervention has been ruled out by the White House and NATO and, in any event, could find that force caught between the fires of the two opposing sides in the civil war. If Syrian chemical weapons were used in large numbers or find their way to Jihadi groups, those calculations might change.  However, even limited troop deployments to destroy or take control of these weapons would entail great risk, violate the territorial integrity of Syria and, in the process, become a potential act of war.

Others have advocated establishing „safe zones” to protect both sides.  While superficially this may sound appealing, it is naive.  Evenhandedness will not be seen as such and will be perceived as a major step to undermine Assad.  And what happens if ground forces are used to attack these safe zones?  How would the West respond?  Clearly, the risk of escalation would be real.

A peace conference, sponsored by the U.S and Russia, will convene shortly.  Obviously, a negotiated solution is better than continued fighting.  But exerting sufficient leverage on Assad to accept negotiations and possibly a partitioned Syria is an uphill fight at best.  Controlling the divided opposition could be mission impossible. Meanwhile, Russian motives, given the transfer of surface-to-surface anti-ship missiles, are understandably suspect and Moscow’s excuse of conforming with existing contractual obligations implausible. However, a negotiated settlement is the least bad option and must be attempted despite the low probability of success.

In one sense, Syria’s civil war resembles that of Spain’s seventy-five years ago.  Clearly, the Spanish Civil War was a precursor of World War II with the Nazis and Soviets supporting the two opposing warring coalitions.  Today, Sunni and Shia enemies in the region are waging a proxy war in Syria through their surrogates.  Iran, Hezbollah and to some degree Iraq have rallied to aid the regime while Qatar and Saudi Arabia are providing aid to the opposition including Jihadis.

The key questions are how does this end and when?  If negotiations fail and with the remaining options for the West and the U.S. ranging from bad to worse, no one has even a workable solution.   And that is why Syria could become a supernova.