The battle of the Mr. Cools 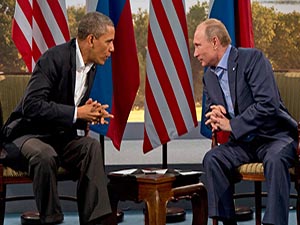 If the situation in Ukraine were not so dire for the Ukrainian people, what a parody this could be.  Facing off are two Mr. Cools.  In the eastern corner is President Vlad Putin emulating tough guy actor Humphrey Bogart but in a smaller version of Arnold Schwarzenegger’s muscular body.  Whether Vlad thinks he is Peter the Great, Nicholas II (the last of the Romanov line) or Mikhail Gorbachev (who imploded the Soviet Union), his bare chested he-man style is surely good for the Russian soul.

In the western corner is President Barry Obama whose studied intellectual aloofness is meant to confound his adversary.  Still keen on leading from behind after the Crimea takeover, Barry has used the bully pulpit twice to extol the Affordable Health Care Act and once to downplay the agreement reached in Geneva last Thursday on ending the Ukraine standoff.  His major emissaries have been Secretary of State John Kerry doing the heavy lifting with his Russian counterparts and Press Secretary Jay Carney making the tough pronouncements.

How does this end?  Three interesting observations are relevant.  First, while the media has been reporting this crisis in too often cataclysmic terms (a spark could start a war; war is imminent; Ukraine is under siege), more balanced perspectives are coming from western embassies in Ukraine and outside visits by experienced diplomats and politicians.  The latter see conditions as tense yet far from exploding.  Even the Washington Post erred in the crisis direction by titling a recent op-ed as “Boots on the ground” suggesting land forces should be sent to Ukraine when the author was referring expressly to NATO’s Baltic, southern and eastern borders.

Second, many of the so-called pro-Russian forces are employed and supplied by deposed president Viktor Yanukovych.  Further, a number of mayors and other officials in eastern Ukraine appointed by Yanukovych are part of this cabal reacting against the new government in Kiev.  This of course provides a perfectly deniable force for Putin.  However, if a large component of these factions are indeed Ukrainian, then that must be factored into the political equation.

Third, a majority of Ukraine’s GDP is in the hands of a dozen or so oligarchs.  It is in their direct financial and economic interests that a satisfactory agreement is reached.  Otherwise they risk losing much of their wealth and conceivably their freedom.  Additionally, banking sanctions have reportedly caused some of Putin’s strongest supporters in Moscow to caution their president that any further moves into eastern Ukraine will be very bad for business.  And that would not be good for Putin. Japanese banks are cutting off links with Russia on strictly business grounds, a further sign that the financial noose may be tightening if not on Putin certainly on his cronies and supporters.

Tobias Ellwood, a British MP recently in Kiev has tweeted that perhaps a new Magna Charta-like deal might work in Ukraine.  In 1215, the English barons met with King John at Runnymede to curb his powers and set out their rights under law.  Perhaps using the Ukrainian oligarchs as barons to negotiate with the various Ukrainian King John pretenders may yield a peaceful solution.

This column has called for calm in addressing Ukraine.  It is a crisis for Ukrainians.  It is not the worst or most dangerous crisis since the end of the Cold War.  September 11th, the second Iraqi invasion and the financial crash of 2007/2008 were far more serious.  Ukraine could become a real crisis.  However, if that occurred, NATO almost certainly would be forced into action and the alliance rejuvenated—a rejuvenation sorely needed.  And Russia would ingest a problem in occupying parts of Ukraine it could never digest.

Let us not fool anyone: neither Humphrey Putin nor Cool Hand Obama will prevail.  Tragically, like Syria, Iraq, Afghanistan, Central African Republic and South Sudan, Ukraine will ultimately be left to fend for itself.  To the sorrow of some, a new cold war is not in the offing.  Sadly, Ukrainians will struggle with the hardships of failed government no matter who wins the May elections.

Perhaps self-interest will compel the oligarchs to achieve a positive outcome.  This is a glimmer of a hope and not a strategy.  Yet, it may be the least bad way out of this situation.