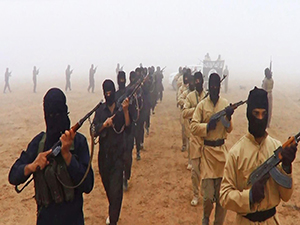 How dangerous is the Islamic State (IS)?  Given the barbarism, ruthlessness and brutality of the IS in establishing a caliphate in part by absorbing or coercing acceptance by Sunnis, Baathists and former Saddam loyalists disenfranchised or persecuted by the Shia government in Baghdad, will that amalgam hold?  Or will IS’s inhuman behavior ultimately provoke a rebellion by local Sunni tribes?

Alternatively, is the IS phenomenon and the surprising suddenness of its seizure of space in Iraq and Syria a harbinger of an even greater threat to the region and beyond?  Reports of IS now extending its poisonous tentacles into Pakistan may or may not prove accurate.  However, the possibility is very worrying.

The crucial question is whether IS is an existential danger over time or whether its threat has been exaggerated by its surprising successes so far in Iraq and Syria.  History offers several interesting perspectives although the past is never a guarantee or even an accurate predictor of the future.

Consider the Bolsheviks, the Nazis and the Chinese Communists.  Vladimir Lenin was sent in a sealed train to Russia by Germany in April 1917 ultimately to engineer a separate peace that would end Russia’s role in World War I.  Lenin, of course did more than that.  The subsequent revolution overthrew the Kerensky government and led the Bolsheviks to power by early 1918.  Lenin’s tactics were to mobilize the few, armed with a powerful organization, ideology, commitment and action plan that produced a takeover.

While Adolph Hitler entered office as Chancellor legally and then won elections in 1933, the Nazi Party likewise was well organized, ideologically committed to a doctrine of inhuman proportion and motivated by Germany’s defeat in World War I and the economic collapse that impoverished the state.  Hitler then killed or imprisoned the opposition over his tyrannical and brutal rule.

Of course, literally thousands of revolutionary and terrorist organizations have unsuccessfully attempted to win control of a state. But terror has also worked.  One can argue that Urgun and Palmach regimes of terror in Palestine against the British after World War II was critical to the creation of Israel.  And just after World War I, rebellion in Iraq forced the British Army to withdraw and the Royal Air Force deputized to assume the role of imposing the will of the occupying power by applying punishment and retaliation from the air against the local forces.

IS, led by Abu Bakr al-Baghdadi who established a caliphate earlier this year in Syria and Iraq, has taken some of its military tactics from the German Blitzkrieg.  IS struck quickly in gaining and controlling territory.  Then, IS followed up with assuming the role of local governance through a combination of extreme intimidation by crucifying or beheading anyone standing in their way and recruiting Sunnis as noted above.

At this point, IS gains in Iraq are theoretically reversible.  But that requires a political solution with genuine reconciliation among Shia, Sunni and Kurds and a revitalization of Iraqi Security Forces.  That said, a basically Shia security force will have tough going in Anbar Province reportedly just captured by IS.

If IS increases its hold over Iraq and mounts a successful assault against Baghdad, it will indeed become a potentially existential threat to the region and beyond.  Saudi Arabia will be next on the IS game plan.  Other regional states will become highly vulnerable.  And the large number of foreign Jihadists with legitimate European, African and American passports will constitute a clear and present danger to those regions.

The coalition must focus on the potential consequences of IS overwhelming the Iraqi government.  A high-level coalition conference with heads of state and government is needed now.  The first requirement is to cajole, convince or coerce the Baghdad government to move urgently in reconciliation.  Then, the coalition must agree on what political and military support it will provide. And Iran cannot be precluded even if engaged by cutouts.

The threat of IS may be exaggerated.  But if effective action is not taken now, IS will become existential.  And that threat will extend far beyond the Middle East.