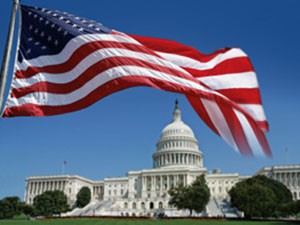 In this corner, wearing black trunks and weighing in at 175 pounds is the president of the United States. In that corner, weighing collectively 101,101 pounds and wearing even darker trunks are the 535 members of the U.S. Congress. When the bell rings, please do something.

That six-year fight has had only one result so far–broken government. But this state of failed government did not happen over night or even in six days. The current disintegration of government is akin to a disease that took years to metastasize. The potentially fatal flaws lay in the Constitution and divided government based on separation of powers in which not one word is mentioned about political parties. To be sure, the United States almost came irreversibly apart in 1861 over states’ rights and slavery.

It took a civil war to correct that constitutional flaw. While harsh words and the occasional flurry of violence including duels to the death have been part and parcel of American politics since its earliest days, the spirit of compromises somehow won through. What is different today?

First, barring an extraordinary crisis or emergency, can this broken government repair itself? Second, can a political system devised by the best minds of the 18th century withstand the demands of the 21st century? Third, how far has this government disintegrated?

A few anecdotal symptoms: Congress has always been the piñata for pundits, satirists and humorists of all stripes. Mark Twain could observe that the Congressman is an idiot. “But I repeat myself.” Will Rogers reckoned that every time Congress wished to play a joke on the American people they passed a law. And every law they wrote, he continued, turned out to be a joke.

But has Congress outdone itself? Immediately after the November elections, Republican Majority Leader of the Senate Mitch McConnell promised that, unlike its predecessor, the 114th Congress would work together as a model of governance. Sadly, the honeymoon was over before the marriage vows were taken. Last week, showed just how broken government has become.

To many, the letter written by Senator Tom Cotton (with less than two months experience as a Senator) and signed by forty-six of his colleagues and sent to Iran’s Majlis (Parliament) and the Supreme Leader was the poster child for a broken government. To others, that letter resurrected some of Congress’s worst moments since the House Committee on Un-American Activities and Tail-Gunner Joe McCarthy’s hearings accusing many in government of treason and subversion–all without a prosecution but many a persecution.

How could the legislature interfere with a critical negotiation trying to sink it BEFORE that negotiation was even finalized? And does no one in the Senate understand that the negotiation is not only between the US and Iran–that the other five permanent members of the UN Security Council and Germany are engaged?

The House is little better off. It has become by default a parliamentary system in which on the Republican side, a majority of a majority is required to bring legislation to a vote. The incredible shortsightedness of the Republican Tea Party minority on forcing a government shutdown over funding the Department of Homeland Security through amendments to undo the president’s executive order on immigration was only overcome by Democratic votes on a clean bill. And yet another investigation on Benghazi seems a waste of public money.

Now two sophomore and one freshman senator and a few dozen members of the House do not make a quorum. In fairness, members of Congress on both sides of the aisle have grounds for challenging and even retaliating against White House unilateral action. President Barack Obama’s indecisiveness and aloofness can be seen as arrogance. He lacks the people skills of a Bill Clinton or a George W. Bush. One senior senator was asked how many times he was called to the White House to meet the president. He said once was enough; that the president showed such an unhealthy disdain for members of Congress contributing to the disharmony on both ends of Pennsylvania Avenue. And this critic is a Democrat.

But a broken government does not mean presidents are powerless to act. Whether or not the 2001 and 2002 authorizations to use military force apply to waging war on the Islamic State, American men and women are in combat in Iraq and over Syria. There was no legislation approving the Libyan intervention. And Executive orders from changing environmental regulations to immigration policy to circumvent a gridlocked Congress understandably angered many on Capitol Hill further aggravating already hostile relations.

The immediate solution is greater public engagement in governance. Otherwise we will get the government we deserve. But will anyone listen?