World Powers Restrained on Gaza Conflict, as Iran Benefits Most 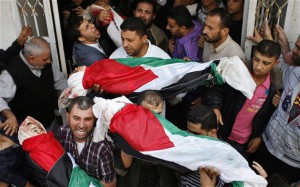 As fighting in Gaza continues, reactions from major world powers have little to do with mediation – all while Iran seems to be benefiting the most from the current escalation.

From Washington to Moscow, everyone was counting on Egyptian diplomacy to end the current bout. China remains ‘concerned’ about the developments and many are stressing, yet again,  the need of resolving the Middle East conflict.

E.U. foreign affairs chief Catherine Ashton has urged Israel to respond ‘proportionately’ in Gaza, reiterating the ‘caution’ expressed earlier at the European foreign and defense ministers meeting in Paris on November 15. Today, all of Europe seems to be preparing for the weekend after agreeing that the escalation is worrisome but at the same time acknowledging that Israel has the right to protect its citizens and that both Israel and Hamas should try to avoid civilian casualties. This is the only response one could expect from the E.U. considering the internal economic problems the bloc currently faces.

The United States is focused more on internal issues and less on foreign policy, and Russia is assessing its relations with the region in light of the Arab Spring last year. As Stratfor noted in a recent analysis: “Russia was the main sponsor and beneficiary of the military regimes established during the Cold War era, and the political evolutions in these countries will have a big impact on Russia’s energy and weapons relationships in the region (as Libya has shown). Furthermore, the secondary effect of the Arab Spring is a region-wide reshuffling of geopolitical relationships, such as the potential reassessment of Egypt’s security treaty with Israel. Russia’s political relationships will therefore be affected by the nature of the change in each country, both internally and in its foreign policy realignment.”

“…it is clear that there will be regional efforts that will lead the way for brokering a political resolution for the conflict,” – Antonia Colibasanu

It is therefore logical to count on Egypt diplomacy – after all, the government is still influenced by the military, which will not allow Gaza’s problems to spill into Egypt. Syria can’t get involved because of its own conflict. Jordan has its own problems, too, considering the renewed protests today.

As things look now, Iran seems to be benefiting the most from the situation as the latest Stratfor analysis explains:

“In Tehran, Iranian officials are likely quite content with these developments. Iran needed a distraction from the conflict in Syria. It now has that, at least temporarily. Iran also needed to revise its relationship with Hamas and demonstrate that it retains leverage through militant groups in the Palestinian territories as part of its deterrence strategy against a potential strike on its nuclear program. Hamas decided in the past year that it was better off aligning itself with its ascendant parent organization, the Muslim Brotherhood, than remaining tethered to an ideological rival like Iran that was being put on the defensive in the region. Iran could still capture Hamas’ attention through weapons sales, however, and may have even expected that Israel would detect the Fajr

From a tactical perspective, it remains to be seen if Israel will move forward with a ground operation. (For those interested in tactical analysis – and curious how an Israeli ground attack might look like, here’s a piece on the topic.)

With the Egyptian precedent, it is clear that there will be regional efforts that will lead the way for brokering a political resolution for the conflict. Also,  Tunisia’s Foreign Minister Rafik Abdessalem will visit Gaza on November 17. Other regional political leaders, including Turkish Prime Minister Recep Tayyip Erdogan, may visit as well.