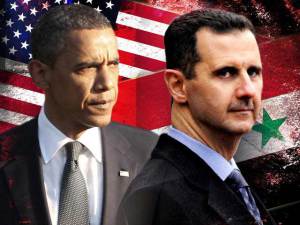 President Barack Obama has come under increasing criticism for being weak, vacillating in the use of American power.  The infamous “red line” drawn over Bashir al Assad’s use of chemical weapons, along with allegations of failing to act more decisively in Syria and Ukraine and the infamous and seemingly toothless “pivot to Asia” are exhibits a, b and c in these allegations.  Allies and partners around the world are described as alarmed over the seeming absence of U.S. leadership along with a rapid decline in the authority of and respect for America.
But wait–-have we not been here before?  Pick a year.  1968 is a good choice.  In late January, North Korea high-jacked USS Pueblo on the open seas, the first time a U.S. Navy ship was captured since the war of 1812.  One week later, the North Vietnamese and Viet Cong launched the Tet Offensive.  Despite the destruction of the invading force, television icon Walter Cronkite would declare the war all but lost.
Amidst the riots over Vietnam, Johnson declared he would not seek his party’s nomination for president.  A week later in April, Martin Luther King was assassinated.  The Secret Service declared Chicago to dangerous for Johnson to attend the Democratic convention that nominated Hubert Humphrey for president.  And while other reasons for LBJ’s absence were clear, riots broke out regardless that marred the convention.
Later that summer, Leonid Brezhnev, leader of the Soviet Union declared his doctrine and sent the Red Army into Czechoslovakia to crush the Prague Spring.  America’s reputation was in tatters.  Red China as it was then called was flexing its muscles.  And of course the march of the Soviet Union towards military superiority in nuclear and conventional arms over the west seemed inexorable.
Still, some believe today is unique and conditions far more dangerous and unstable than in the past accelerated by American weakness and lack of leadership. If 1968 is not to your liking, try 1973 (the October Yom Kippur War and the U.S. nuclear alert); 1974 and Nixon’s resignation; 1982 and the crisis in Europe over Euromissiles; and the economic crises of 2007 and 2008 as other examples when conditions were not very healthy.
Too often, as Mark Twain observed in a different context, America has been counted out.  But do not count on that.  Yes, this column has been very critical of the Obama administration (as it had been of George W. Bush) both domestically and internationally.  This White House is long on sweeping rhetoric and promises and too often absent when it comes to implementing policy or taking action, the Osama bin Laden mission withstanding.
The dismal roll-out of the Affordable Health Care Act and the absence of compelling narratives to explain to America publics policy choices for Afghanistan, Pakistan, Libya, Syria, North Korea and Iran for example are inexplicable.  Yet why do we tolerate North Korea with its boy leader as a nuclear weapons state while declaring Iran’s nuclear weapons ambitions unacceptable?  The White House has failed to articulate its positions.
Foreign friends and adversaries alike may gripe about the failure of U.S. leadership.  But let us be very careful in responding to those charges as much as the “loyal opposition” would like to use them to discredit this administration and blacken the record of the leading Democratic contender for the nomination, Hillary Clinton.  The Democrats did the same to George W. Bush and John McCain although, in fairness, the war in Iraq was the greatest blunder since the Cold War and two administrations have failed and will fail in Afghanistan.
The United States is the most powerful country in the world economically and militarily.  Exercising power however is far more complicated. In the case of the military, it is impossible to defeat by force of arms alone an adversary that possesses no army, navy or air force without other tools of statecraft and economic development–tools that have yet to be perfected.  And, as much of the danger stems from radical religious ideologies, mounting counter-campaigns to discredit and rebuke these perversions of Islam has proven beyond the reach of both Republican and Democratic administrations.
Too many crises today have no solution let alone a good one.  As in Syria and elsewhere, the choices may be between worse, worst and “worstest.”  That American politics has descended to the circles of Hell is not also helpful.
No easy solution exists. A better explanation by the White House of its policy choices is crucial.  And a better understanding of history can at least mitigate exaggerating every crisis as the worst in our lifetimes.
By Harlan Ullman|2017-11-14T21:28:11+02:0027 mai 2014|Blog, Harlan Ullman, Pace & Securitate, Subiecte|0 Comentarii