No easy fixes for NATO 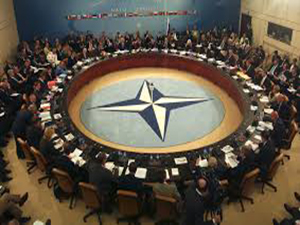 To paraphrase Shakespeare: Alas poor NATO.  We knew it well.
My second column for 2013 bemoaned the absence of even the mention of NATO–the North Atlantic Treaty Organization— in the strategic dialogue that accompanied the start of President Barack Obama’s second term.  Founded in Washington in April 1949 as a counterweight to the emergence of a hostile Soviet Union, NATO became the most successful military alliance in history. Clearly, the strategic “pivot” to Asia announced last year by the White House had overshadowed and eclipsed the importance of Europe.  And, today’s violence in Egypt and Syria as well as the ongoing chaos in Iraq, Afghanistan with Iran’s nuclear ambitions still unclear, has further obscured the strategic visibility of Europe and the alliance that binds both sides of the Atlantic together.
Four years ago, in preparation for re-writing its strategic concept, Anders Fogh Rasmussen, NATO’s Secretary-General, commissioned a “group of experts” led by former Secretary of State Madeleine Albright, to provide a context for this document.  On the day of the conference marking the start of this process, Dr. Albright was asked directly as to whether NATO was still relevant or a relic.   That question remains central to the future of the alliance.
Next year, NATO will hold its biannual heads of government summit.  Obviously, THE central issue on the agenda will be the future of Afghanistan and NATO’s engagement after the withdrawal of all of its combat troops presumably by the end of 2014.  What alliance forces, if any, will remain for training and other purpose has not yet been settled although the American decision will clearly be the determining factor.
But with the U.S. pivot to Asia, turmoil in North Africa and the Middle East, Turkey’s political difficulties and severe cutbacks in defense spending within the alliance, NATO’s future is far from certain.  The strategic concept defined collective defense, crisis management and cooperative security as the underpinnings for the alliance.  Collective defense reflected the heart of the treaty, Article V, and the commitment that “an attack against one was an attack against all.”  The first time Article V was ever invoked was on September 12th, 2001, the day after the Twin Towers collapsed.
The debate that persists among the alliance’s twenty-eight members is between Article V and crisis management, the latter reflecting out of area missions particularly the war in Afghanistan in which threats external to NATO’s borders require alliance responses and the former, direct aggression and attack sparked by fears of a rejuvenated and potentially hostile Russia.  Severe reductions in the size of alliance military forces of course sharpens and intensifies this debate about NATO’s future role and purpose.
Given these circumstances and general public apathy towards NATO as well as strong opposition to the war in Afghanistan, has the alliance any future beyond serving as an insurance policy and not the centerpiece for assuring Western security?  Has NATO, as with every other alliance in history exceeded its shelf life?  Or, does the alliance retain the importance and significance in keeping its members safe and secure as when the Soviet Union was the only adversary?
These questions should be weighed very heavily and then answered by the administration and Congress.  Yet, the chances that this will happen are not good for reasons noted above.  Can anything be done to reverse the odds?
Here are three suggestions that do not require spending any more money.  First, NATO needs a good elevator speech to define its importance.  Second, a name change is long over due (after all, of the 28 members only eight actually border on the Atlantic).  Third, the public must be engaged and informed in all of this.
General The Lord Ismay, NATO’s first Secretary General, quipped that the purpose of NATO was to keep the Americans in, the Germans down and the Russians out.  As far as purpose, NATO is now about keeping its members safe, danger out and Russia with.  One can also add keeping the Americans in should that be necessary.
About a name, “E” was once referred to as “Easy” in the phonetic alphabet.  And “E” is an easy fix for the alliance.  NATO should be renamed “NAETO”—North America-Europe Treaty Organization—reflecting its true membership.
Last, NATO must launch a public diplomacy campaign to make the case for its importance. The easiest way to do that is through talks, public meetings and discussions with elected leaders in parliaments and assemblies on NATO and its future role by former and respected senior military leaders with the experience and background to be credibly received by its citizens.
When or if the White House gets around to planning for the 2014 NATO summit, it might consider these ideas. Otherwise NATO will become a relic and no longer relevant to transatlantic security.
By Harlan Ullman|2013-09-03T14:51:57+03:0020 august 2013|Blog, Harlan Ullman, Pace & Securitate, Subiecte|0 Comentarii