The longest day and our finest hour 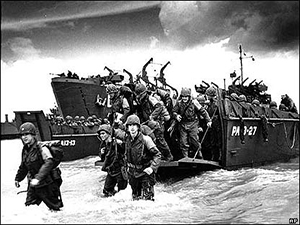 Two days hence marks the 70th anniversary of Operation Overlord (Neptune for the naval portion) and the Normandy invasion. Supreme Allied Commander U.S. General Dwight David Eisenhower’s orders were to occupy Europe and destroy the Nazi war machine.  D-Day marked the start of Ike’s crusade in Europe
Standing atop the Ponte du Hoc heights overlooking Omaha Beach where the U.S. Rangers valiantly assaulted German defenses was always more telling for me than visiting great battlefields from Yorktown to Waterloo and Agincourt.  Perhaps because World War II was as close as any conflict in history matching good against absolute evil, Normandy epitomized the ultimate allied victory in smashing the fiendish Hitlerian enemy.
Writer Cornelius Ryan used the title “longest day” in his great history of Overlord.  Winston Churchill called the Battle of Britain, his nation’s “finest hour.”  Both were fitting descriptions of the amphibious invasions that took place at Omaha, Utah, Sword, Juno and Gold beachheads.
Churchill and his key military advisors supported an indirect strategy to retake occupied territory in North Africa and the Mediterranean prior to launching the attack on Hitler’s “Festung Europa.”  In fact, the British were highly critical of what they believed was the lack of experience and competence of American generals.  The Mediterranean strategy was meant to close those deficits in generalship.  Churchill also had ulterior motives to weaken the Soviet Union by deferring the invasion of Europe.
Franklin Roosevelt and his chiefs of staff favored an early invasion of the continent.  In part, FDR rightly understood that keeping Stalin and the Soviet Union in the war was crucial to an allied victory.  In Washington’s view, an invasion of Europe was strategically more imperative than Churchill’s indirect approach.
Fortunately, success or failure largely hinged on Adolph Hitler’s instincts.  The Fuhrer was convinced that the invasion would come at Calais at the narrows of the English Channel not Normandy.  Hitler also refused to understand that amphibious assaults were best defeated on the beaches and not after the enemy had secured a landing bridgehead.  Hence, Hitler withheld his reserves from the point of attack.
Eisenhower and his staff brilliantly gamed Hitler.  Disinformation and propaganda deceived Hitler by reinforcing his intuition that Calais was the object of D-Day.  A fictitious First U.S. Army Group was created under General George Patton, the one American general the Nazi high command seemed to fear most.  Patton’s communications designated Calais as the objective.  Despite dissent from the High Command, Hitler took the bait.
Unfortunately, as the invasion force was gathering, the foul weather was worsening.  The initial D-Day assault was postponed.  Ike’s meteorologist RAF Group Captain James Stagg predicted a slackening of the storm during the night of June 5th.  Ike gave the order to go.  He also drafted a message in the event the invasion failed assuming full responsibility for the defeat.  Clearly, that message was never sent.  On June 6th, the allies stormed ashore at Normandy not Calais.
The temptation to draw lessons and conclusions from Normandy is powerful.  While the allies made it ashore successfully although with great casualties and had overwhelming numbers and firepower, it took weeks to engineer a break through.  Why was that? Despite allied courage, sacrifice and gallantry, man for man, the Wehrmacht (German army) was formidable even though it was militarily inferior.  Surely that meant something.
Actually, Normandy should be celebrated for different reasons. First, it signaled the beginning of the end of Hitler.  Second, Normandy demonstrated how different nations could band together for a higher purpose no matter the cultural differences and personality disorders among commanders.  Third, it succeeded.
The real heroes were Churchill and Roosevelt who chose Ike to lead. Ike’s personality was crucial in keeping the ragged band of brothers from committing fratricide.  The hostility and animosity with Field Marshal Bernard Montgomery was of legend.  And George Marshall, who desperately wanted to command Overlord but was kept at home because he was too vital to the war effort to leave Washington, was a less sung but nonetheless crucial architect of victory.
Conceiving when or where another Normandy like effort will ever be mounted is difficult.  As with battles at sea from the defeat of the Spanish Armada at the hands of Queen Elizabeth’s brigands in 1588 to Nelson’s triumph at Trafalgar against the combined French and Spanish fleets in 1805 and the Battle of Midway in the Pacific in 1942 that effectively set Japan on the path to defeat, future Normandy’s may rest only in fiction.  Still, June 6th, 1944 was a monumentally important day in history and one this nation must never forget.
By Harlan Ullman|2017-11-14T21:28:09+02:0017 iulie 2014|Analize si studii, Blog, Democratie & Drepturile Omului, Harlan Ullman, Pace & Securitate, Subiecte|0 Comentarii