The Pentagon’s most perplexing and persistent challenge: people 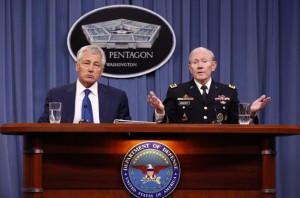 Wilton Park, England:  Here at a conference on Professional Military Education, attention is being focused on one small sliver of the largest challenge facing militaries in general and Western forces in particular:  people.  While John Paul Jones may be less popular in these isles than across the Atlantic, paraphrasing one of his better bon mots captures this perplexing challenge:  “People are more important than guns in the rating of a ship.”

Over the next year and led by the Strategic Choices Review undertaken by the Pentagon and to be finished by month’s end, the latest Quadrennial Defense Review will be conducted.  The mega-challenges are clear.  Regardless of the effect of sequestration, the defense budget will contract.  The only question is how much.

Inbuilt cost growth of astounding proportion for both people and equipment will mandate huge program changes even if defense spending were to remain constant–which it will not.  Simultaneous modernization of strategic, naval, air and ground systems creates further tectonic pressures on where to set priorities and where not.  And to make matters worse, massive regulatory burdens and Congressional micromanagement compound inefficiencies and multiply obstacles in taking rational and sensible decisions over using already scarce and strained resources.

Yet, while everyone pays lip service to the importance of people, without fundamental changes to personnel policies, will the United States be able to maintain capable, motivated, agile, prepared and professional forces essential to protecting the nation’s security into the future?  This warning does not suggest military and civilian Pentagon leadership is unaware of the seriousness of this issue.  It does mean that without real revolutions in how we resolve these personnel challenges, warnings of a 21st century variant of the infamous “hollow force” will sadly prove prescient.

Twelve years of war have had and will have profound effect on the forces particularly those having served multiple tours at war even though a minority of people in uniform has actually spent much time in combat.  No sector in American society is held in higher esteem than the military.  “Thank you for your service,” is as common an expression today in America for people in uniform as is hello.

Service personnel rightfully believe that they are protecting the nation.  They are highly skilled; dedicated; armed with the best weapons and technology available; and believe in what they are doing.  Virtually no expense has been spared in providing them the wherewithal to carry out their duties including importing American institutions such as PX’s, latest movies and fast food chains to forward operating bases.  We even send bottled war at $800 a gallon to front line troops and have spent $70 billion in countering improvised explosive devices to protect our people in uniform.

For those who have served in combat, responsibilities are heavy as is the rush of adrenalin when in action and bullets are flying.  Even junior enlisted personnel often have responsibilities far greater than their rank suggests.  And however dangerous, many fighting men and women are attracted to this line of work.

As the war in Iraq is over and the drawdown from Afghanistan takes hold, fewer Americans will be sent in harm’s way, assuming that another conflict does not erupt.  So what then do our forces have to look forward to in peacetime and will those duties be so routine, onerous and uninteresting as to make retaining a highly professional force difficult or impossible?  And there is the matter of ethics and even morality.

Most of our operations on the ground have been “capture or kill” missions reinforced by the ability to bring direct and indirect fires to bear and to rely in many cases on drones and standoff attacks.  The line between this form of war and assassination is quite fine. Laws of war, more or less well developed in battle between like conventional forces, do not preclude atrocities or excesses.  However, over centuries, unlike current conflicts, laws of war have precedence and a certain legitimacy in international law.

Consider the staff sergeant or lieutenant back from the wars where perhaps responsibility for protecting or governing a town, village or large area was theirs.  In many cases, life or death decisions were common.  Yet, in peacetime, these same non-coms and officers will be evaluated as to how well they fill out duty rosters to provide troops for menial tasks or guard duty while budgets will erode training and honing professional skills.

Solutions to resolve this people crisis about what is the number one priority for defense abound PROVIDING the nation’s leadership recognizes and chooses to act on this understanding.  The senior military leadership is able and prepared to create these solutions.  But policy must allow them to do so.  And revolutionary ideas are more than welcome and needed.