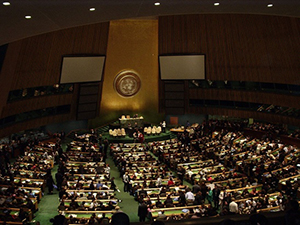 Tomorrow, July 4th, marks America’s Independence Day.  The document we celebrate, the Declaration of Independence that rejected British rule, was the masterpiece of democratic expression written by Thomas Jefferson in 1776.  The most profound lines are not the more famous “When in the course of human events” and “all men are created equal.”  They appear at the end of the first sentence of the document’s second paragraph: “when… government…becomes destructive, it is the right of the people to alter or abolish it and institute new government.”
Two hundred and thirty-seven years later, too many governments have become destructive in governing whether through smashing dissent with force or blatant, repressive misuse of the law or, as in the United States, by failing to overcome political gridlock and provide sensible solutions to vital economic and social problems.  Given growing middle classes world wide, the ubiquity of social media and instant global communications, people are exercising the right if not to alter or abolish government, surely to challenge it.  From violence in Syria and so far less in Egypt, Brazil and Bulgaria, people are increasingly expressing dissatisfaction with government whether through failure to deliver or unacceptable autocratic behavior.
This may not be a global 1848 revolutionary moment. However, it is a period when aspirations for dignity, opportunity and better standards of living can now be immediately translated into political action with perhaps greater impact and certainly with real consequence. Yet, enacting positive and progressive political change remains elusive once or if power is secured or the protests are accepted by government.
In many parts of the world, remedies to destructive government will not come from free and fair elections.  More important is establishing rule of law, pluralism and respect for civil liberties. Revolutions, coups and civil wars vie with peaceful transitions and protests in advancing the needs and grievances of the many discontented with the few in charge.
Even in autocratically or semi-autocratically ruled states, unrest grows.  China, for example, has massive numbers of large and unreported protests.  While perhaps a majority of Russians support or tolerate Vladimir Putin’s rule, protests are waxing.
This global display of disaffection may reflect a tectonic shift in politics and the passing of an international order based on the sovereignty and superiority of the state in place since the Treaty of Westphalia of 1648.  Globalization has impelled and caused this interaction largely through the widespread diffusion of all forms of power from economic to social, ideological and moral.  Individuals and non-state actors have thus far been most empowered at the expense of states.  If these phenomena turn out to be enduring, destructive or failing governments will become raisons d’etre for profound change, with very unpredictable outcomes both for good and ill.
Syria and Egypt are two immediate examples.  In Syria, the options are not good or bad.  They are horrible.  Military intervention is not a viable alternative and arming the opposition is unlikely to work or to reduce the violence and killing certainly for the short-term.
In Egypt, President Mohammed Morsi is astride several tigers, specifically public animosity over ill-advised decisions in political appointments to failing to make economic progress to the influence of the Muslim Brotherhood.  The reality is that there are no solutions to both crises, a further blockage in understanding the consequences of this collision between the state system and globalization and what if anything can be done to enhance the opportunities and minimize the risks and downsides.
Most of the tools and structures for dealing with what could be a transformative and possibly a revolutionarily different era are creatures from the past century and Post World War II and Cold War.  The UN, World Bank, NATO, IMF and even the G-8 are part of this archaic infrastructure.  The European Union is an off-spring.  Newer organizations including the Shanghai Cooperative Organization and The Gulf Cooperation Council are much newer and may have larger roles to play.
The geostrategic facts of this changing world are limits on the uses of military force and the importance of economic leverage.  Military force may or may not be necessary in securing outcomes.  It is insufficient however in correcting destructive or failed governments. Emphasis will shift to trade, investment and economic development as the best cures for repairing destructive government by collective improvements in standards of living and fulfilling expectations.  But how to use these economic tools at a time of fiscal crises over debt and deficits and sluggish if not declining economies may be THE question to address?
A partial answer rests in two pending international negotiations: the Transatlantic and Transpacific trade treaties.  Neither is a panacea. However, if approved, both will be at least partial cures for repairing destructive and failing governments.
By Harlan Ullman|2017-11-14T21:28:36+02:007 iulie 2013|Analize si studii, Blog, Democratie & Drepturile Omului, Guvernare globala, Harlan Ullman, Subiecte|0 Comentarii