Skip to content
Acasa/Blog/Harlan Ullman/Will the Constitution survive this decade?

Will the Constitution survive this decade? 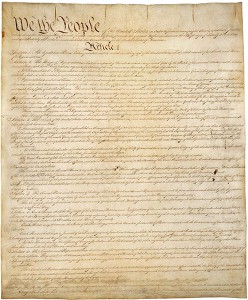 Most Americans believe that government is broken.  But what can be done, if anything, to repair a broken government?  One potentially immovable obstacle is a Constitution that may have outlived its usefulness.
The Constitution is based on the checks and balances of a divided government that maximize individual freedom and liberty by limiting the power of government while assuring citizens specific safeguards through the “Bill of Rights.”  However, divided government requires compromise and civility to function effectively.
Article I defines the Legislature.  As the first branch of government, the Founding Fathers believed that the two houses of Congress would govern the nation passing laws and regulations in line with eighteen additional delegated powers beginning with: “The Congress shall have Power To lay and collect Taxes, Duties, Imposts and Excises, to pay the Debts and provide for the common Defence and general Welfare of the United States; but all Duties, Imposts and Excises shall be uniform throughout the United States.”
It was no accident that Article II defined the presidency.  As the second branch, the first line of Article II states that “The executive power shall be vested in the President.” That meant the role of the president was to carry out the will of Congress presumably on an “equal” but seemingly subordinate role even with veto power.  And the president was elected by an Electoral College selected by each state and not by popular vote—a process that still remains in place with some risk.
Article III created a judiciary in which “The judicial Power of the United States shall be vested in one supreme Court, and in such inferior Courts as the Congress may from time to time ordain and establish.”
But how this has changed.
With the Great Depression and World War II, presidential power and authority grew like Topsy. With the onset of the Cold War and the so-called nuclear release “football,” the president as Commander-in-Chief could initiate war without Congressional approval.   What emerged has been an Imperial Presidency reversing the intent of Article I and II.
Then, the cumulative effects of the Vietnam War; Watergate and the Nixon resignation; the misery index under Jimmy Carter; Bill Clinton’s impeachment; interventions in Afghanistan in 2001 and Iraq in 2003 that have proven disastrous; the detritus of the financial crisis of 2007-2008; intense political polarization; Islamic State (IS) attacks; and stagnant wages have metastasized into fear, anxiety and worry about the future by a majority of Americans. This fear has been expressed in public anger and rage against government.
Further, Congress has abdicated power to the presidency. December 8th, 1941 was the last time Congress declared war. The subsequent conflicts in Korea, Vietnam, Afghanistan and Iraq twice, as well as the war on terror, were waged with resolutions and authorizations to use military force through the president’s authority as Commander-in-Chief.
Regarding the judiciary, the Constitution never gave the Supreme Court power to declare laws “unconstitutional.” Yet, since Marbury vs. Madison in 1803, the court has assumed this authority. And today, the court has become overly politicized electing a president in 2000 in deciding for George W. Bush in Bush v. Gore.
For good reason, the Constitution never mentions political parties. Indeed, the Founding Fathers cautioned against “factions,” meaning political parties. Tragically, both parties are dominated by their more extreme left and right wings.  And today, politics is about getting elected and re-elected, not governing while discrediting the opposition to the maximum degree possible in this process.
It is no surprise that this poisonous and pernicious political environment has exiled compromise and civility from the public discourse rendering potentially mortal wounds to a divided government dependent on both. And here is an interesting scenario of how and why the Constitution could fail.
Suppose the Electoral College is deadlocked in choosing a president—-and who knows how the presidential election of 2016 will turn out. In this case, a close reading of Article II and the 12th and 20th Amendments is essential.  If the College remains deadlocked as it has been rarely in the past, the House, voting by state not by individual elects the president (and the Senate, by individual, the vice president.)
If no candidate wins a majority of House votes before inauguration at noon on January 20th, “the Congress shall choose” an interim president.  How that election is conducted is unspecified. And since 1936, while the incoming Congress would select the president, in this case, Article II implies it is the outgoing one—suggesting a Bush v. Gore judicial resolution but on steroids especially if the court remains divided 4-4.
In 1789, who would have thought?
_________________________________________________________________
Harlan Ullman is UPI’s Arnaud de Borchgrave Distinguished Columnist. He is Senior Advisor at the Atlantic Council and at Business Executives for National Security (BENS) and chairs two private companies.  His latest book is A Handful of Bullets:  How the Murder of Archduke Franz Ferdinand Still Menaces the Peace.
By Harlan Ullman|2017-11-14T21:27:38+02:0016 martie 2016|Blog, Harlan Ullman|0 Comentarii